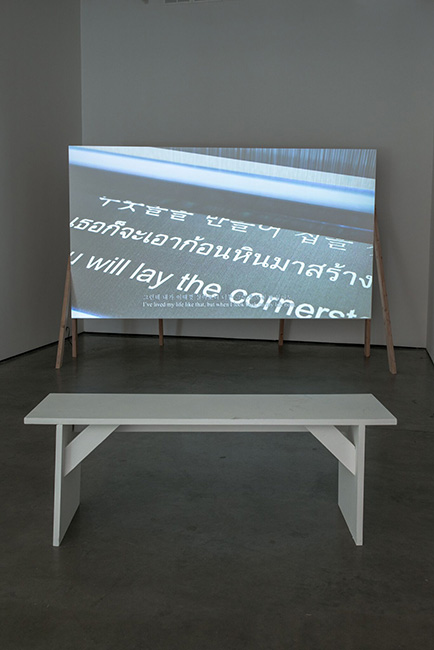 In the main room, Kwon presents a single-channel video and a sculptural installation titled Tying (2014-2016). This 28-minute video conveys emotional and psychological aspects of human desire and struggles in the industrial capitalism of Asia in the 20th and 21st centuries. It primarily shows the repetitive movements of factory machines of the textile industry in Asia with an audio of the interview of the artist’s own mother who was a former textile factory worker for over thirty years and another factory worker from Jim Thompson, a textile mill in Thailand. They both recall their experience in the factory in a somewhat nostalgic manner and worry about the current situation of the automatized factory where machines replace human laborers.

Modern human labor cannot be separated from a factory operation system called Fordism. The term refers to the Ford Motor Company, who created a system of mass production in the early 20th century. Fordism is often paired with another term called Taylorism–the post-war model of economic operation in modern capitalism, which systematically divides a factory system into intellectual work and manual labor. Intellectual works belong to a management department while all laborers in a manufacturing factory do specialized repetitive tasks.

This operating system of modern capitalism of the 20th century has put humans and machines together as a single operating whole–a hybrid form of flesh and gadgetry. New, hybrid Humanities gained social value, while also fulfilling utilitarian necessity. Global industrialization, in turn, allowed humans to cultivate their ongoing romance with the machine. As they manufactured goods, humans also manufactured their symbolical identities, registering themselves as distinct mechanisms in industrial capitalism. A laborer, for instance, might have found his or her ontological identity by believing, “I am a factory worker who operates the machines that generate social utility, so I am valuable in this society.” Human labor, in a Heideggerian sense, was a well-functioning tool.

However, Taylorism in the 21st century has betrayed humans. Advancing machine technologies have increasingly pushed human labor to the margin as robots take over all repetitive tasks. Machines find their partners not in humans but in other machines. Human labor is clumsy, redundant, slow. What is needed today are only creative and intellectual works by a small group of management members. The system of late capitalism does not need human laborers. Human labor, in this advanced technology, is a broken tool.

What does this do to human psychology ? The presence of laborers is rendered effective by their very absence from the workplace. The factory workers who experienced the 20th century’s human-led manufacturing industry are no longer able to register themselves in the system of operation. In our highly automated world, they are a “subject-without” : the factory workers fail to identify their symbolic representation in the factory and have a sense of void thereafter. Since the machines replaced their job, their identity is lost. They feel empty due to the missing symbolic registration. Laborers without factories.

Yet, in Kwon’s video, this void is constantly filled. He suggests an interesting analogy between artists and laborers in terms of their process of creation. For Kwon, his mother and the factory worker can be symbolic artists. As a painter chooses colors from the palette, finding patterns that are manifested through pictorial complexity on canvas, a textile worker chooses colors of threads, finding arrangements to create magnificent patterns of fabrics. In this sense, they are artists who are not in the system of art but in the industrial world.

Marcel Duchamp, in describing his Readymades, put it well : “The word ‘art,’ etymologically speaking, means making ; quite simply ‘making.’ ‘Making with,’ if you wish, and so perhaps ‘making with the hands.’… What is making ? Making something is choosing a tube of blue, a tube of red, and putting some of it on the palette…it is always choosing. …Choice is the main thing, even in normal painting.” [1] Duchamp found art not within the art world, but in the mechanisms of everyday life. Through context one might derive the different mode of consumption and interaction. The male urinal, for instance, might no longer function in a restroom, but through artistic intervention finds a new function in a gallery as an object of contemplation.

Like Duchamp, Kwon’s video and sculptural installation remind us of the textile industry, but also allows us to look at the installation not as a factory facility but as a place of art. Kwon presents two seemingly identical outcomes–one made by an artist and another one made by a factory worker. For him, what determines art should not belong to the system of art like museums, galleries, and art schools, but what they do. Both his mother and the factory worker are artists. 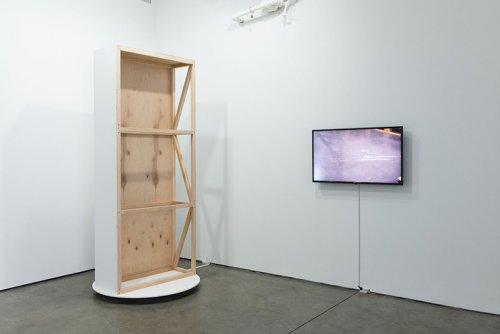 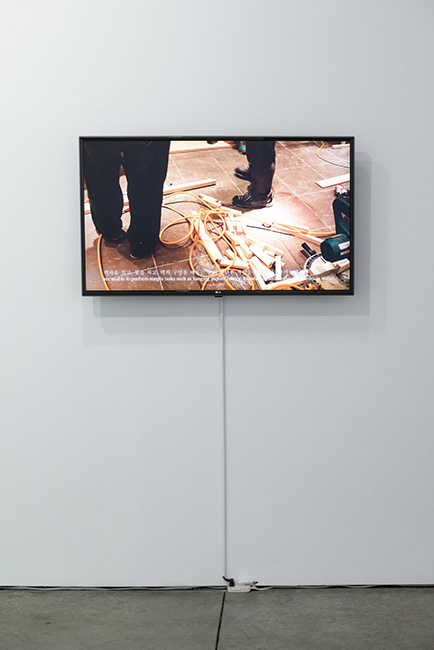 Kwon’s artistic concern about the relationship between an artist and a laborer continues to another room in the gallery. Multi-Use Wall (2014) consists of a pop-up wall made by the artist and a single-channel video that depicts his production process in museums as an installer. Although Kwon is a critically-acclaimed artist in Korea, to make a living, he works as a part-time installer in museums, building walls and stages. Kwon is both on stage and off stage as he is both an artist and laborer in the art world. For Multi-Use Wall (2014), he inverts what has been hidden and what has been spotlighted, revealing the strong irony of the art world with the capital : the artist has to not only produce critically valued art, but also work behind the curtain to make a living. Kwon reverberates between two symbolic representations–an artist and a worker.

In this sense, Kwon’s project operates the principle of antinomies –a continued oscillation and recoil between opposite meanings of beings. It is an ontological struggle which cannot be solved but is rather only sustained through a continuous reversal. Just as Duchamp created his female alter ego, Rrose Sélavy, turning himself from a male to a female and from a female to a male, Kwon turns himself between two symbolic representations of beings in the art world. As Žižek would suggest, Kwon is an artist not without labor. “The negation of negation” or “a double negation” plays a crucial role in the formation of his artistic practice. He identifies himself by constantly switching the opposite positions between two symbolic meanings of a creative artist and a laborer in capitalism. Kwon’s New York debut successfully seduces the audience not just aesthetically but also philosophically.