Treatise on Rhythm, Color, and Birdsong : the Lexicon

In the last two essays, I’ve discussed the works of composer Olivier Messiaen and painter Remedios Varo. They both fearlessly sought validation from fields of knowledge other than art and music, creating different nodes of connection with the world beyond the dominant genres or styles of their time.

This essay attempts to provide the key terms that crop up in the thinking of both artists. Together, this series of three essays serves as research for my solo exhibition, Treatise on Rhythm, Color, and Birdsong, which takes place at Space O’newwall in Seoul from August 5th to August 25th in 2016.

The brain Our brain allows us to map the chaotic arrays of sensory inputs onto orderly structured meanings in order to perceive things in a way that makes sense. This connecting is what I call “reasoning.” Reasoning itself is a retroactive registering of the sensory information into pre-existing symbolic orders. On the other hand, our brain also disconnects and rearranges multiple mental frameworks, independently of initial sensory inputs. It entails memories and complex connections of various parts of the brain. This operates in the service of creativity.

Imāgo The noun “imagination” originated in the 14th century with the term “image” or “imāgo” [1] in Latin. In Roman burial practices, the “imāgo” was the wax casting of the deceased ancestor’s face that functioned as a votive object to preserve the ancestor’s memory. By extension, the verb “to imagine” means to form a mental representation of a thing. According to German art historian Hans Belting, the “image” is defined not by its mere visibility but by its being invested, by the beholder, with a symbolic meaning and a kind of mental “frame.” In his book An Anthropology of Images, he states that an image “is more than a product of perception. It is created as the result of personal or collective knowledge and intention. We live with images, we comprehend the world in images. And this living repertory of our internal images connects with the physical production of external pictures that we stage in the social realm.” [2]  His notion of an image posits the interaction between the visible external stimuli and the internal interpretation of what we see. If we accept his notion of an image as the interaction between the inside and the outside, can the verb “imagine” mean the process of the interaction, namely, “to connect” between the external input and our internal understanding ? 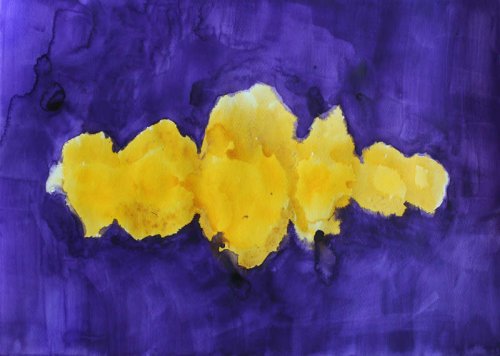 Imagination In the book Kant’s Theory of Imagination, Sarah L. Gibbons focuses on the role of imagination in Immanuel Kant’s Critique of Pure Reason. She says, according to Kant, imagination connects sensibility and understanding : “imagination ‘mediates’ between understanding and sensibility… That is, imagination must synthesize sensible intuitions in such a way as to make them ‘available’ to be conceptually unified and recognized as an object through the categories.” [3]. What Kant means is that our mind synthesizes the chaotic array of sensory impressions into an orderly pattern as a conceptually unified and recognized form. The act of synthesis is therefore also a “making sense” of sensory impressions in order to understand the properties of objects. Kant attributes this synthesis to the “power of imagination.” Kant clearly states the definition of understanding : “The unity of apperception [Kant’s term for the mind’s capacity to resolve mental states] in relation to the synthesis of imagination is the understanding.” [4]. That is to say, imagination helps us to understand what the objects are from the initial sensory input. With apperception as a foundation, the imaginative synthesis builds a mental representation of the object of perception, i.e. the process of conceptualization.

However, the imaginative synthesis of the chaotic array of sensory impressions does not directly generate orderly organized concepts. Prior,it requires an affinity of semblance before connecting the sensory impressions to concepts. Let us go back to the term “image” or “imāgo” for a moment. The term “image” means a likeness. Through imagining, we are looking for an affinity between the appearance of the sensory input and the appearance of the conceptual representation—between the thing “out there” and the “thing-of-thought” (Gedankending). For example, when we see a flower, what we initially encounter is the material quality of a flower such as its color, shape, size, smell, etc. At this stage, a flower appears to us as a collection of its physical properties. We see the properties of a thing first, then say it is a flower. We determine the thing to be what we call a “flower” based on the semblance of a flower in our conceptual understanding. Imagination synthesizes the sensory properties of a thing, and connects it to the conceptual representation, to our understanding of the thing as a category. Imagination connects the flower “out there” derived from our sensory input and the “thing-of-thought,” the concept of “flower,” by way of a semblance.

The Hippocampus-A Creativity Machine We can also see imagination as the act of linking multiple memories. We connect different sets of memories when imagining something new. For example, let us imagine a cup. But this time, imagine a cup that you have never seen like a cup made of a cloud in the sky. I may imagine the Earth as a cup — the Earth is a large inside-out cup that contains water. In the two examples above, I do not simply recall an image of an ordinary cup or a known concept of a cup that is preexisting. I connect different sets of images or conceptual frames of reference. In order for this complex connection to happen, multiple memories are involved. The hippocampus, that part of the brain responsible for long-term memory formation, has a crucial role in imagination. It may sound like a reductionist viewpoint, but recent neuroscience discoveries, using MRI scans, suggest that memory and imagination are highly related. For example, brain scans done by scientists at Washington University in St. Louis indicate that areas used to recall memories are the same as those involved in simulating the future. In particular, the links between the dorsolateral prefrontal cortex and the hippocampus light up when a person is either engaged in planning for the future or remembering the past. [5] This means that we use the memories of past events to create something that is not there yet.. In this sense, we remember the future. Other studies done by Dr. Demis Hassabie and his colleagues of Cardiff University also show that patients suffering from hippocampal damage lack imagination. Their patients show the absence of holistic representations of environmental settings when imagining new experiences. [6] Creativity, therefore, results from the mixture of multiple memories of the past.

When imagining new experiences or the future, we recall memories of the past, and redirect the connections with various information in the brain in order to construct new imaginative situations. Imagining something new is, therefore, the convoluted recombination of the past. Imagination connects initial sensory inputs to conceptual understanding through semblance, entailing rich connections among different parts of the brain, which in turn create new mental events, thanks to the ability of the hippocampus to connect the multiplicities of past experience. 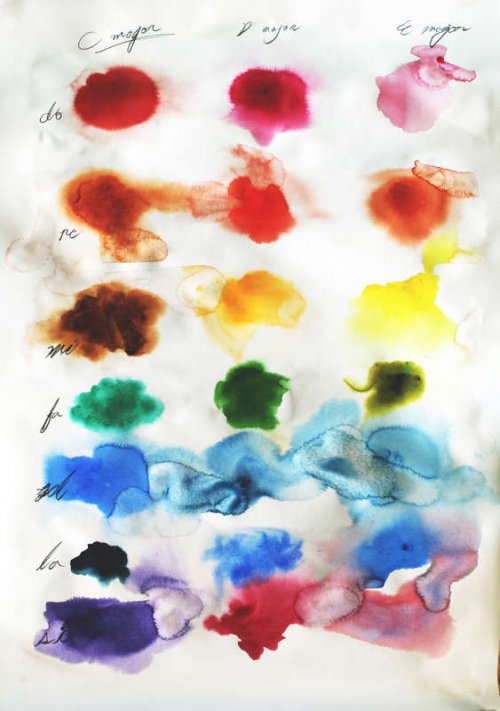 Sound-Color Synesthesia Synesthesia is a phenomenon in which sensory input evokes other sensory experience not directly caused by outside physical events. For example, when a synesthete sees colors, he or she hears certain sounds. For his "modes of limited transposition," Olivier Messiaen composed music that provided his own testimony to sound-color synesthesia. The relationship between color and music is essential to Remedios Varo’s paintings. In Creation of the Birds (1957), a half-human/half-owl woman paints with one hand holding a paintbrush that extends from a violin hanging on her necklace. In her other hand, she holds a triangular magnifying glass that refracts light from a star onto a piece of paper where painted birds come to life and fly away. Varo suggests here that the prismatic colors are necessary for the origin of life, and creates a conceptual knot between colors, music, light, and life itself. Through Messiaen and Varo’s works, synesthesia “awakens” in the mind of an audience.