The proposition of Teaching New Art Media–Part I

In December 2018, I published an article about my proposal for studio art classes in the 21st century. It was a general teaching philosophy for our contemporary college-level art education. This time, I would like to write a proposal specifically for new media classes.

The cover picture is an artwork titled Sun & Sea : Marina at Lithuanian Pavilion at the Biennale Arte 2019. It is a collaboration between theater director Rugilė Barzdžiukaitė, playwright Vaiva Grainytė, and composer Lina Lapelytė. It is an experimental opera-performance about a day at the beach that raises awareness about climate change. Performers of all ages lie down on the artificial beach, chat, read, sunbathe, and sing while the viewers watch them from the mezzanine. They sing a song about climate change, ranging from individual concerns about sunburn to larger environmental issues. This innovative project won the Golden Lion, the Biennale’s best national pavilion and one of the most significant awards in the art world. However, within existing educational models, where do we find room to cultivate this kind of innovative artwork ? 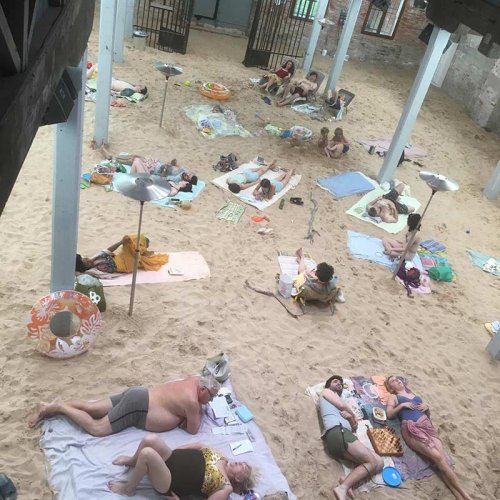 In December 2018, I published an article about my proposal for studio art classes in the 21st century. It was a general teaching philosophy for our contemporary college-level art education. This time, I would like to write a proposal specifically for new media classes. This proposal has two parts. For the Part I, I will focus on the core vision, values, and mission for a new art media program based on my recent appointment as an assistant professor of New Media Art at the School of Art at Northern Arizona University. For Part II, I will invite David Van Ness, New Media Art coordinator at Northern Arizona University and listen to his vision for new art classes in the digital age.

For this article, I am going to use “New Art Media” instead of “New Media Art.” “New Media Art,” in its core, means non-traditional art media, including both digital media and non-digital media such as installation, performance, socially-engaged art, etc. However, in the late 90s and early 2000s, the term “New Art Media” was predominantly used to describe digital art such as net-art, virtual reality, and real-time digital interactivity. For this reason, “New Art Media” seems to be a more appropriate term in this article to describe overarching ideas of contemporary art practice today.

The vision : To promote interdisciplinary studies and research for both utility and aesthetics

In the age of the post-medium condition, as famously described by Rosalind E. Krauss in 1999, a medium is no longer the identity of an artist. Today, we see artists in the post-conceptual, post-studio, and interdisciplinary era where no single discipline, style, or genre prevails. Artists’ primary practices go beyond the mere making of art objects. They are cultural producers who engage in knowledge-production through various forms and activities.

However, most art schools around the world still provide separate curriculums based on media. Although most schools offer new media and interdisciplinary art classes, the hierarchy is clear : new media and interdisciplinary art classes are excluded from mandatory core curriculums and often provided as optional or secondary classes. Take, for instance, two examples from top-ranked art schools in the U.S. The Yale School of Art offers several disparate programs such as painting, sculpture, graphic design, and photography. While they provide Film/Video/Interdisciplinary courses, it is not their formal area of study. Likewise, The School of Art Institute of Chicago provides many areas of study based on specific media. Interdisciplinary practices are promoted as the secondary concern of each department. What is more, most schools seek and hire faculty based on media, such as an assistant professor of painting, sculpture, digital media, etc. A particular skill set is an integral part of their evaluation process when they search for a professor. These medium-centered traditions in art schools do not reflect the fast-changing contemporary art field where artists engage in multiple media or non-traditional media such as socially-engaged art.

Therefore, my first vision for the new art media program is to provide a hub that connects different disciplines. It serves a hinge that bridges various fields of knowledge. A professor in this area needs to be a great negotiator who is willing to make a fair deal with other professors and program coordinators in different areas. If a new art media program has millions of dollars, a dedicated building, facility, technicians, managers, and lots of faculty members, they do not need to ask for collaborations with other areas. In reality, however, most art departments do not have enough budget for developing a holistic, interdisciplinary art program.

My second vision for the new art media program is to teach skills and concepts that can be both useful and purely artistic. To take two historical examples, the late Bauhaus in Dessau (1925-1932) and Berlin (1932-1933)both focused on the utility of art for more extensive social benefits. Their vision was to provide a simple, affordable, and useful design that could be used by all people. On the other hand, In 1933, when the Nazis shut down the Bauhaus in Germany, many faculty members from the Bauhaus, including most notably Josef Albers, settled at Black Mountain. With other artists in the U.S. together, Black Mountain College (1933–1957) in North Carolina was founded. They promoted artistic freedom and collaborations without worrying about social utility in art. For me, both artistic freedom and utility in the art are equally important today’s world. This is in part because enrollment in fine art programs is rapidly declining due to market demand. Many students who are interested in art choose design programs instead, focusing on utility. That said, I believe the most significant artists and designers always manage to blur the boundary between usefulness and artistic freedom, such as Andy Warhol and the early Bauhaus.

To realize these visions, both digital skills and thematic approaches need to be implemented in the program. First, digital skills are important for both pure artistic exploration and various industry and market demand. Students can expand their artistic languages and prepare the uncertain future as a studio artist who might also need supplementary employment to sustain their artistic practice in the beginning stage of their career, or throughout their career. Essential digital skills include 2D/3D digital fabrications, editing for videos and motion graphics, physical computing such as Arduino and Raspberry-pi, programing such as Processing, and VR/AR. Second, the program needs to offer thematic courses for students to understand urgent issues and conversations that take place around the world by serious artists, curators, and art historians. The thematic courses I suggest are :

2) “Art in the Age of Anthropocene” including eco-art, land-art, bio-art, eco-activism, and art inspired by nature, Thing Theory, or Speculative Realism

3) “Art After the Internet” including both digital and non-digital artworks that are inspired by social media, video games, or other digital culture.

Also, the program needs to offer space and time for non-credit events and alternative educational opportunities such as multidisciplinary presentations, group-critiques, and group-teaching. The purpose of these informal events is to find new ways of creating art and promoting the exchange of ideas outside existing traditional pedagotical and institutional structures. Through the multidisciplinary presentations, artists from different areas and professions from other fields meet and present their work to promote the future cross-disciplinary collaborations or inspirations. Through the group-critiques, students and faculty can give feedback on each other’s work and exchange ideas without hierarchy. For the group-teaching, students and faculty can teach each other skills. These non-credit events in the field are often called “the Educational Turn.” The existing or existed models include the School of Poetic Computation in New York (2013-the present), Unitednationsplaza in Berlin (2006– 2007), and the Night School at the New Museum in New York and Mexico City (2008–2009).

The New Art Media believe students and faculty are equal, expecting to be respected and treated fairly while understanding that each individual is unique. The program inspires the value of innovations and cross-disciplinary collaborations through a balanced, flexible, and open mindset. The program provides a nonjudgmental environment where students and faculty help each other find their strengths and creative solutions. Lastly, communication is the core of the program’s value. The conditions of excellent communication are trust and love.