Negotiating for Racists’ History Against Asians

The United States in the 19th and early 20th century was an incredibly racist society.

All Men Are Created Equal 2 mins from Jaewook Lee on Vimeo.

There was strong favoritism for “white” persons and strong racial discriminations and hatred against “non-white” people. In the West Coast, Asians were singled out and excluded in many ways. This historical condition of racial segregation was reinforced and maintained throughout all aspect of Asian lives, including the legal, marital, and economic right for them. The existence of xenophobic hostility led most Asians to live vulnerable lives. For example, up until the early 20th century, the United States allowed only “white” persons to have the right to be naturalized. Asians were not eligible for citizenship. Also, on May 6, 1882, President Chester A. Arthur signed on the Chinese Exclusion Act, a United States federal law, prohibiting all immigrants from China. The Chinese Exclusion Act was the first law that prevented a specific ethnic group from immigrating to the United States. The Act was finally repealed by the Magnuson Act on December 17, 1943. It was around the time when China became an alliance to the U.S. against Japan during the World War II, and the U.S. needed to promote positive images of their fairness. 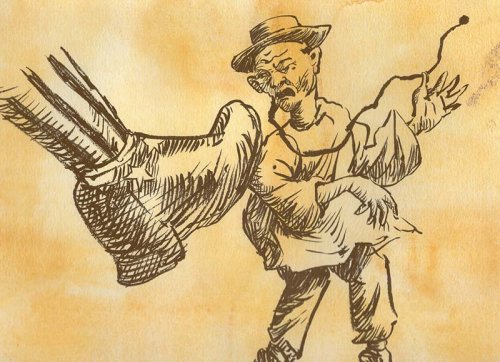 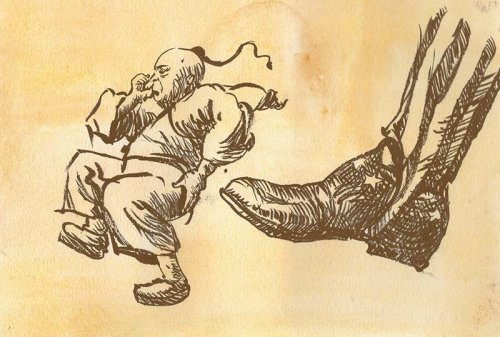 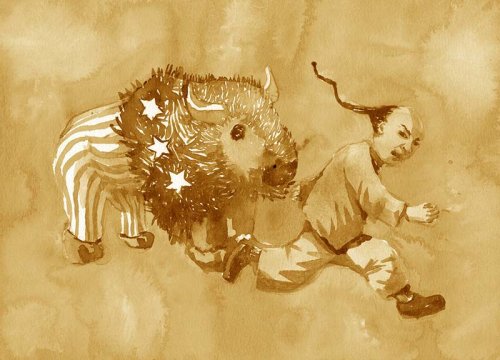 During the Chinese Exclusion Act, Chinese -Americans were depicted as outsiders and threats in American society. A political cartoon was a popular form during the late 19th and early 20th century in America. Political cartoons were usually on the editorial page of many newspapers. Most cartoonists used visual caricatures to show political situations and scandals with a sense of humor and mockery. Major newspapers depicted Asians with stereotypical images who were socially inferiors, diseased, unethical, and living in filthy conditions. There were patterns of satire drawings against Chinese immigrants. Chinese were mocked and ridiculed for their appearance such as braided ponytails. Most of the satire illustrations reinstated the stereotypical images of funny-looking Asians, getting kicked out or beaten by a white man. 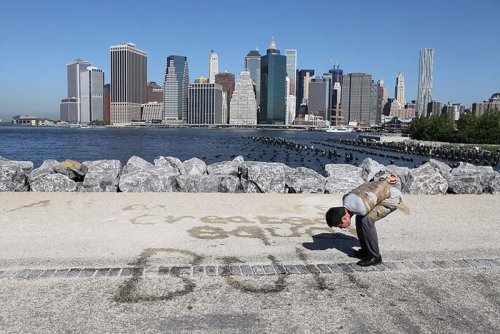 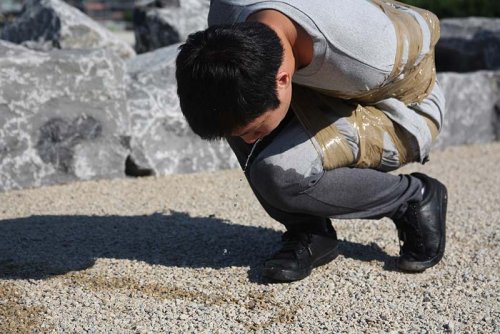 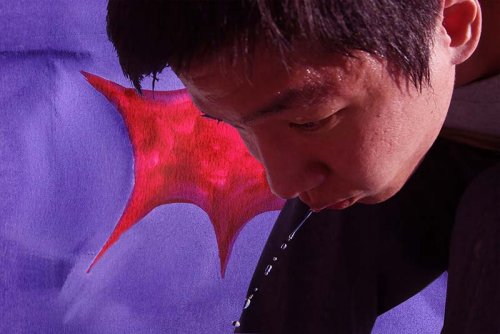 All Men Are Created Equal (2018) is a Single-channel video with sound. The video shows myself transporting water through my mouth, from the river to ground, as I write Thomas Jefferson’s immortal phrase, “All men are created equal” - to which I add : bullshit. I created a condition "struggle" for this action by taping myself up. The laborious action appears absurd in light of New York City’s skyline, emblematic of the overdeveloped city in contrast to the potent struggle of Asian-Americans against racism. The performance pictures are arranged with a series of watercolor drawings that represent emotions of pain, conflict, and anger. In the video, the Brooklyn Bridge Park becomes the space for political action. In the end, after the water- writing completely evaporates, the park becomes again, peaceful space for the visitors of New York City. 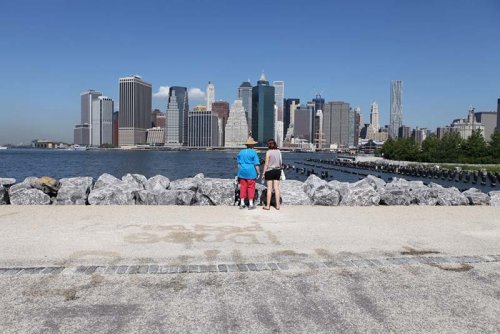 I am an immigrant from South Korea. I have the oscillating identity and conditioned authority in living in the States. In Jacques Derrida’ Of Hospitality, the absolute hospitality of the host to the guests is impossible. The guest is always a hostage on some level. It is always conditioned hospitality. We can apply the same logic to historical and current immigration policy. The idea of “inequity” regarding immigration issues has been deeply rooted in the history of America.

I was also interested in the idea of “presence” as its ephemeral nature in time and space. How do we apprehend the present ? Marc Auge said in his book Oblivion that the memory of the past and expectations of the future characterize “the present”. In order to apprehend the presentness of America, I decided to bring the memory of a place to expect a better future of the place for Asian-Americans. Without the memories of a place, it would be impossible to negotiate space and reimagine the world. When I walked in Brooklyn Bridge Park and saw the magnificent cityscape of New York City, I thought this is the place I should work on, addressing Asian descents have a place in America. As Dr. Shelly Shang-Hee Lee says, “Asians in America weber not foreigners, but rather a people with a long history in this country and hence a rightful claim to American identity and belonging [1].”