A conversation between Jaewook Lee and Chao Jiaxing

Chao Jiaxing [1] : When you mention these mirror neurons, it’s a scientific discovery of a neurologic mechanism that anticipates and empathizes with the behavior, emotion, intention, and feelings of others. You’ve emphasized the current understanding that the neurons operate as a neural network. This mechanism can now be observed through technological advancements in neurology. Do you think the participation of this observational technology is important in your creation ?

Jaewook Lee [2] : I am glad that you brought that up. Before I answer your question, let me briefly explain about some of the technologies being used to monitor mirror neurons. To see specific locations where mirror neurons are activated, scientists use fMRI (Functional Magnetic Resonance Imaging). It detects the blood flow within functioning areas of the brain. Using fMRI, we can determine which part of the brain is active by tracking blood oxygen levels in the brain. It generates good spatial resolutions. However, what I used for my video work is an EEG machine (Electroencephalography). It is a device that tracks the fluctuations in electrical processes of the brain. It can generate high temporal resolutions. Since the locations for mirror neurons have been examined by many scientists, I wanted to see how the actors’ brainwaves change through time. Especially, I wanted to see how active their brains were when the actors imagined the severe scenes of the Korean War. 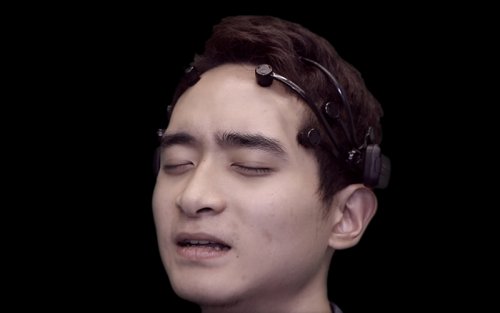 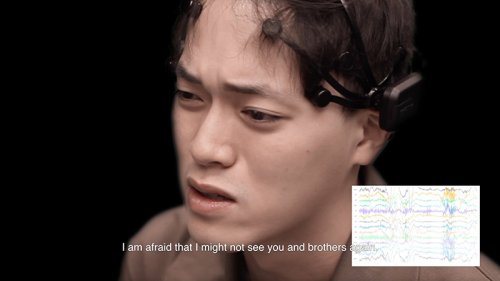 So, to answer your question, I want to show the emotional (or subjective) and the scientific (or quantitative) responses of these actors simultaneously. The act of convincing here plays a central role. Through its visualizations of neural activity, the EEG technology convinces us what has been unverifiable through action alone. For instance, I made a similar video with other actors without using an EEG. The main difference using this device is that the recording generates visible, measurable and thus verifiable outcomes. It reveals what has been hidden from our general senses. Without the machine, you can’t easily say whether the actors really feel something or not. But with it, you can say that they really feel it. The brainwaves being captured seem objective while the actors’ facial expressions seem quite emotional. I link the subjective and the objective together, creating a sense of antithesis. The actors are not only subjects who express emotions but also objects being measured and observed. 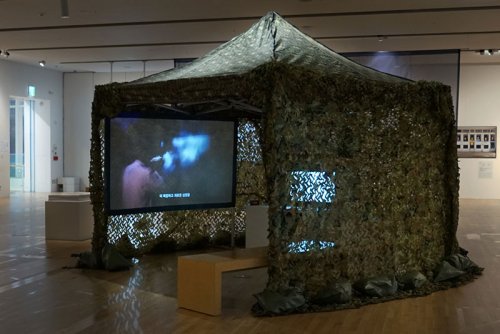 Installation view at the BUK Seoul Museum of Art, 2017

JL : I am interested in the experience of the audience. I want to offer the audience a new kind of experience. This is the reason why I incorporate sculptural elements into my work. More precisely, I make an installation in which, to borrow the phrase from Adorno, “different genres of arts fray their boundaries,” and join together. I often put a video, sculptural objects, texts, and performance together as one work. Different mediums are placed in conversation with one another. I believe this intermingling of mediums within the space of an exhibition would enrich the experience of the audience.   CJ : With this newest exhibition, you mentioned a lot of professional knowledge about neuroscience. For example, you mentioned that “according to recent scientific discoveries, the left ventral promoter cortex is responsible for the motor system that is tightly connected to language.” Could you introduce the process of your research, cooperation or even something you doubt ?

JL : Carolyn Christov Bakargiev has described “how different fields of knowledge meet at the heart of re-imagining the world.” I’m interested in this re-imagining, and I like to imagine how science would operate in art or how art would operate in science. I also enjoy reading science journals. This naturally leads me to create artworks that are related. In this sense, scientific knowledge and inquiry serve as a springboard for my artistic imagination. I believe this process broadens the sphere of art.

For this project, I read a couple of books about neuropsychology including “The Empathic Brain” by Christian Keysers and “Whistling Vivaldi” by Claude M. Steele. With this new information, I revisited my old video work that I made when I was a graduate student at Carnegie Mellon University in 2012. I conducted an interview with a North Korean defector who lost family members when she escaped from North Korea. I was translating her story into English. While I was translating, I felt a severe pain. Though I didn’t realize it at the time, my brain was in many ways empathizing with her experience, literally feeling what I imagined she felt. Then, several years later, after reading articles and books about the human brain on empathy, I connected the dots and decided to remake the old video with this new scientific knowledge.

CJ : During the creation of "Empathic Audition"(2017), you mentioned the strength of spoken language. We can find a lot of sad stories about North Korean defectors. I cannot help myself doubting whether this unified way of sad storytelling is true. I even think the ideas of “victimization and control” have been embedded in their genes. As a person who has a South Korean identity, would you doubt this kind of “emotion” comes from spoken language ?

JL : That is a very interesting point of view. Indeed, I have never thought of that before. I grew up in South Korea and now live in the United States. It is very rare to find a single good story about life in North Korea. I want to hear different perspectives on North Korea. The defector with whom I interviewed actually delivered very active voice tone. She was more like an activist who tried to spread her story to the world. It was me who feels emotional suffering while translating her story into English. She wasn’t emotional. For these reasons, I don’t believe that speaking necessarily delivers emotions better. Sometimes, writings convey complex emotions. Speaking and writings have different ways of carrying human emotions. 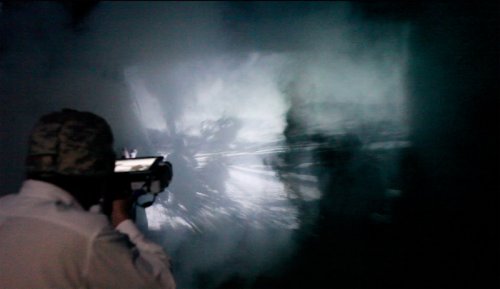 CJ : I understand your thought on the loop that “pain” goes through across different generations. You used actors to act the whole process of emotion instead of doing it by yourself or using ordinary people. Do you have any particular attitude about the difference between using actors or non-actors ?   JL : That is also a very interesting question. In the past, I have worked with ordinary people who were not professional actors or actresses. Their ability to deliver emotions was quite disappointing. On the other hand, professional actors and actresses were very good at expressing their painful emotions. This does not mean the trained actors or actresses tried fake crying with us. They were simply more engaged. They might feel stronger pain than normal people. Empathizing other people’s pain needs discipline.

CJ : What do you think of “identity” in the art industry as a mainstream topic ?

I often doubt anything that is in the mainstream. I believe there are many artists who are sincere about the political and social condition of their identities. I also think there are many artists who simply use their identities as an artistic tool for success. One thing I don’t like is playing victimhood for the Western audience. There have been many exhibitions about Asia or other parts of the world. These exhibitions often delivered the unpleasant political histories and struggles that could satisfy so-called “elite” Western people. Art is diverse not only in the United States or Europe but everywhere in the world. So do artistic themes. Regardless what kinds of artists they are, I want to see more diversified modes of artistic and curatorial ideas and expressions on identity-politics. I personally take identity as a subject of curiosity, not as an artistic strategy. I want to know how we form our identity in a more profound way, borrowing science and philosophy. 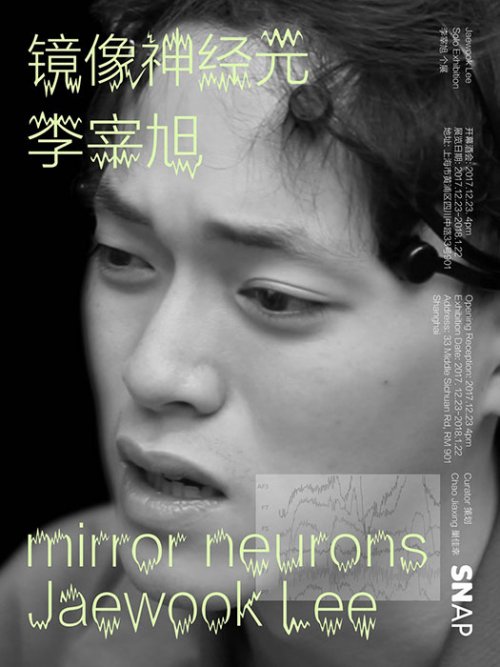 [1] Chao Jiaxing was involved in the curatorial program at the Shanghai Zhuqizhan Art Museum in 2009 and participated as a research assistant for the Young Artists Projects at the Duolun Art Museum. Chao curated the inaugural exhibition for non-profit art space AM Space in 2010. Between 2011-2015, She served as the curator and managing director of V ART CENTER founded by the Shanghai Institute of Visual Arts, a non-profit space. I produced over 50 exhibitions and projects with emerging artists, and the institution became one of the most important incubating grounds for the Shanghai art scene. In 2015, Chao also worked as a consulting curator for the New Century Art Foundation based in Beijing. Her recent exhibitions include "Goethe Open Space 2016 :’Moving Institutions’," "Community of Celibates" cooperated with philosopher Lu Xinghua, "Take Me Out (K11 museum)," “AN ALL-ENCOMPASSING ALL SOUNDS," cooperated with philosopher Jiang Yuhui (CAFAM). In 2017, She officially joined the Start Museum, as the senior curator, located in the West Bund district in Shanghai. Chao is a frequent contributor to renowned art magazines in China and internationally, which include Artforum.cn, Randian-online, LEAP, Art World, Art China among others. Her current research interests are participatory art, cross-disciplinary art practices, and discussions on theory and art practice.

[2] Jaewook Lee is an artist, writer, amateur scientist, semi-philosopher, and sometime curator. Lee is the founder and director of Mindful Joint (http://mindfuljoint.com), an annual symposium that focuses on non-hierarchical knowledge sharing in contemporary art. Lee is the recipient of awards such as the 4th SINAP (Sindoh Artist Support Program) and the SeMA Emerging Artists and Curators Supporting Program by Seoul Museum of Art. Lee has participated in exhibitions, talks, performances, and screenings at such venues as Art Sonje Center in Seoul (2017), the Guggenheim Museum in New York (2017), the Asia Culture Center in Gwangju (2016), the Seoul Museum of Art in Seoul (2015), NURTUREart in Brooklyn (2014), the Museo Juan Manuel Blanes in Montevideo (2014), MANIFESTA 9 parallel event in Hasselt (2012), the Chelsea Art Museum in New York (2011), and the Coreana Museum in Seoul (2006), among others. Lee is a faculty member at the University of Chicago and the School of Visual Arts (SVA) in New York City.

It’s a great pleasure to share my solo exhibition first time in Shanghai, China. The exhibition will run alongside another solo show of a remarkable Chinese artist Yang Jian in the same space. The opening will be on December 23, 4 pm at SNAP. And the symposium will be on December 24, 1:30pm at the START museum. Let me know if you will be in Shanghai. Spend holidays and Christmas Eve with us.