Between objectivity and wonder

The last appointment with Las Italias is starring Paolo Parisi. His research, his works, the approach to the view - we may say the perception of the world - have focused almost obsessively on painting. Yet, to understand them thoroughly, we must ask ourselves questions about the terms of the existence and the contemporary purpose of painting.

Native of Catania and Florentine by adoption, Parisi was born in 1965 and made his debut in 1993 with Rilievi (Reliefs), a series of nautical charts of the Peloponnese "re-drawn" with clay.

The nature of the image, almost a tactile re-appropriation of the territory, recalls the genesis of the light chamber used by the eighteenth-century vedutisti to fix on the painting the landscape views : the nautical charts are projected on the canvas and then retraced with the fingers ; at a later time, the canvases are treated to maintain the color of the moist clay.

The cartographic relief becomes pictorial sign, reconnecting to a childish and primeval expressive dimension ; the action of painting is fixed and crystallized to be shared with the viewer, who sees the sign exactly as it is while it is drawn. 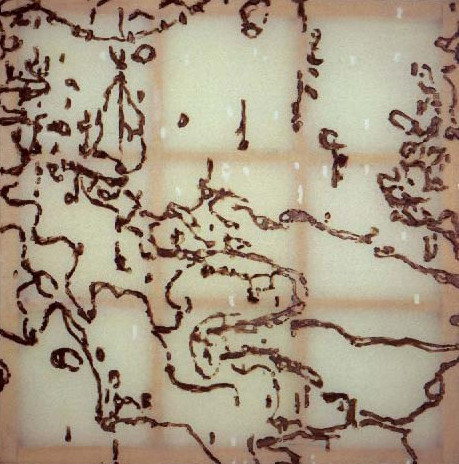 It is therefore clear the dichotomy about which Parisi builds his painting, in balance between the presumed objectivity of the system used to know and represent the world and the creative and subjective element which is the "sign" and the "gesture" of art.

While distancing himself from the mere artist’s inner being and from the claim to represent what he defines as the "his/her own inner magma" interpreted as a sort of solipsistic monologue of the ego transposed in painting, Parisi builds a dialogue between the "concept" and the irrationality belonging to the work of art and he looks into, in his own words : "the relationship that can exist between the unfathomable psyche and the (alleged and temporary) certainty of the reconstruction we have done and still are doing of our experience of art, over the centuries. " 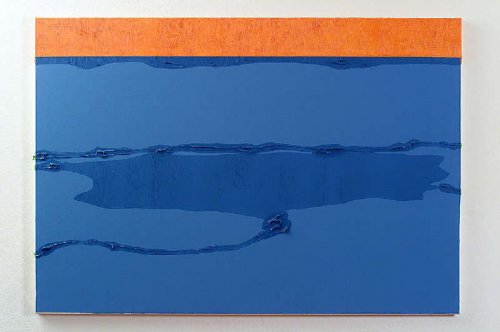 His reflection deals with the very act of looking at the artworks with the series Inversi (Inverse) (2000 - 2006) in which the traditional relationship between the surface and the background of the painting is reversed through the drafting of a monochromatic acrylic color superimposed on maps drawn with fingers and oil paint on the canvas.

The pictorial "sign" is therefore below the colored surface, reemerging as a ring or as a fringe around the edges of the work. The image contains its own negation and re-composes itself as new entity through the viewing. Far from being deleted or submerged by color, the "hidden" cartography emerges on the painting surface in an unexpected and uncontrollable way. 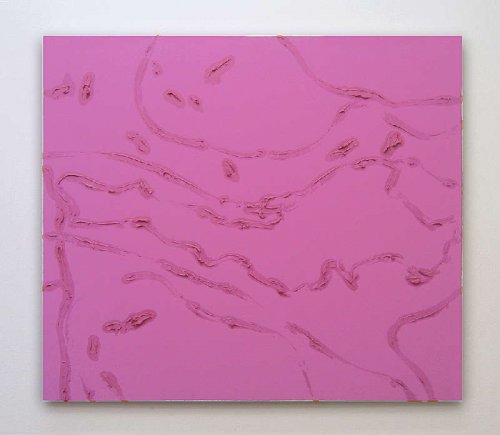 The choice of the monochrome layer (that recurs also in the series Coast to Coast 2006) recalls the modernist dictated according to which – fully simplifying it - the painting does not have to build an illusory room enclosed in a frame, but it has to tautologically represent itself, or else a two-dimensional surface on which lines and colors lay, forcing it to the research of an expressive code that focuses also on the viewer, on his/her position in space and his/her perception. 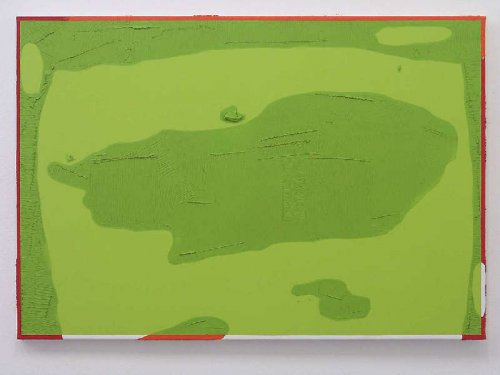 This research calls the viewer to "see" as well as to look at the work, in order to obtain a fruition that is never mere contemplation but participation, common reflection and sharing. As in the works of the series Under the bridge (2011), made from the homonym text song by the Red Hot Chili Peppers. 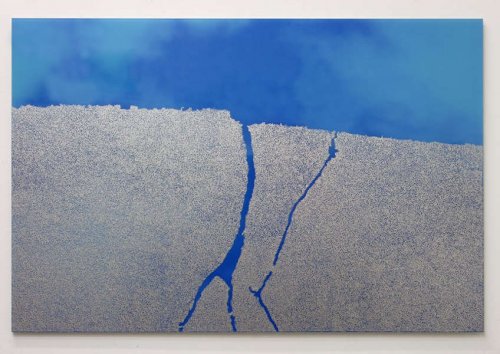 The works represent the aerial views of the three most important for flow rate Sicilian rivers - Salso, Platani and Simeto - drawn with a silver marker on photographs of the sky. The particular choice of silver let the works take on the color that surrounds them and, thanks to the reflection of the viewer, mutate according to his/her motion in space. 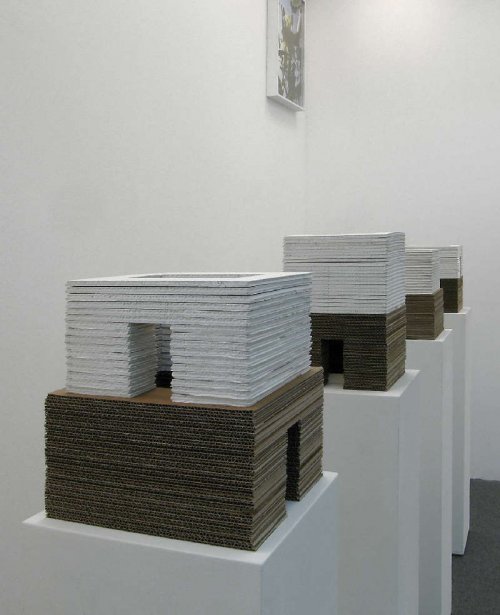 In U.s.a.i.s.o. (an Italian acronym for Uno sull’altro in senso orario, One on the other clockwise - 1994-2011), the betrayal of two-dimensionality in favor of the third dimension cannot completely detach the works from the visual sensitivity of painting : made of cardboard and chalk, they arise from the superposition of colored surfaces.

Therefore, free from the idea of contemplation, the painting by Parisi underlines its experiential dimension that can be expressed also through extra-pictorial media.

A direction which the artist has had the opportunity to express as follows : "Starting from the time in which the painting was emancipated by its own isolation opening up to the connection with the space, but also with other media and possibilities of expression and experience, I believe that it is possible for us to afford any form of redefinition. Especially, as for me, in terms of not isolation.

So the ephemeral, changeable, fleeting energy emanated from the filtered light which crosses and colors the architecture can coexist with the physicality of painting and with the immaterial density of the audio experience. And here, on the coexistence and the sharing, and especially on the physicality and the urgency of our being here and now, we come to what for me is the heart of the matter.

Today, perhaps more than in any other historical period, the painting can regain its original field : space and its redefinition [1]. "

The painting of Parisi, then, never supposes a frontal view but stands as a connecting element between sculpture and architecture, as a fusion of both in space. So his painting can focus on a viable and inhabitable dimension, as in the case of the series Observatorium, consisting of architectural models made with emptied stacks of cardboard and equipped with holes to communicate with the outside.

In Observatorum (Valle del Bove) (Monaco, 2006) the continuity between the module and the surrounding space primarily invests the sound composed by the voices of the other spectators and the scientific recording of the movements of the subsoil of Etna, which leads the visitor through colored PVC tubes that connect the basic housing unit with other rooms. 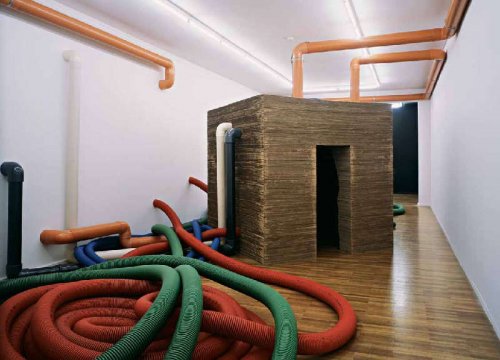 In this case, the irrational dimension of the work is detected in the memory and childhood of the artist, reduced to a rational processing through the "breath" of the volcano, scientifically recorded in order to predict its eventual eruption. 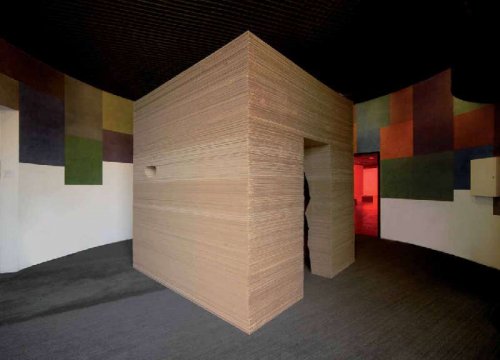 Observatorium (Museum), exhibited as part of a complex project at the Contemporary Art Center Luigi Pecci (2006) in dialogue with the Wall Drawing # 736 Rectangles of Color by Sol Lewitt, calls the viewer to interact entering physically in the work, using it as a device to choose the point of view from which he/she can observe the outside, allowing him/her to put to his/her own sight the frame in which eventually may focus the work of the American artist. 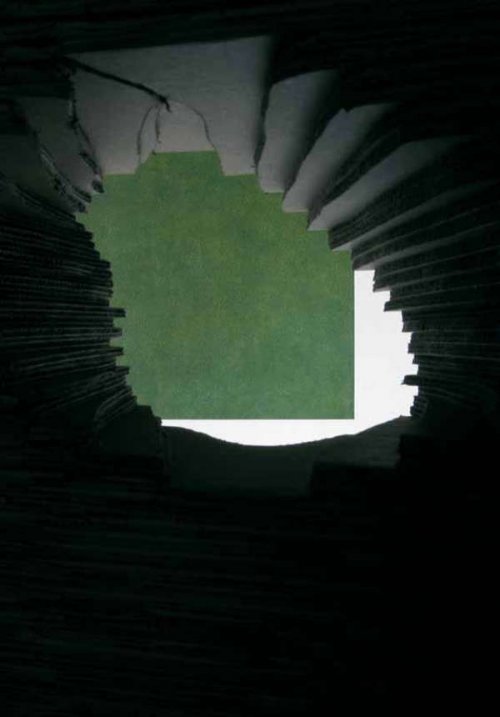 A specific care to the color as a synthesis of space can be found in Unitè d’habitation (2013), a series of monochrome paintings inspired by the homonymous housing units designed by Le Corbusier, a series in which Parisi gives the image of a floor plan made of several residential rooms through the strictly orthogonal drafting of heavy layers of oil paint. 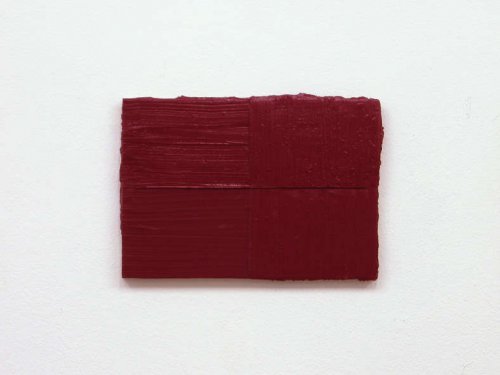 An interpretation of color, tied on one side to the experiential dimension and on the other to the atmospheric one, instead, may be found in Il problema della condivisione dello spazio disponibile in architettura e rispetto al colore del paesaggio. ...e il pulviscolo atmosferico (The problem of sharing the available space in architecture and compared to the color of the landscape. ... and the atmospheric dust), (Pieve a Presciano, Arezzo, 2011). It is an intervention that uses a chimney to release plumes of smoke which is colored with the hues perceived by the human eye, from red to violet. 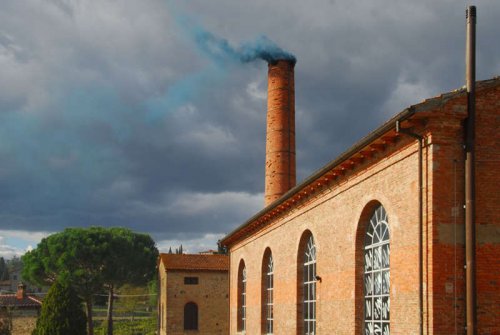 Il problema della condivisione dello spazio disponibile in architettura e rispetto al colore del paesaggio. ...e il pulviscolo atmosferico (The problem of sharing the available room in architecture and compared to the color of the landscape... and the atmospherical dust), 2011, Courtesy l’autore the author and - e Madeinfilandia, Pieve a Presciano

This intervention, on the one hand explores the ideals (and scientific) boundaries of perception, and on the other, through the colored draw spread on the landscape by the wind, emphasizes the experiential dimension of drawing and painting, which do not need necessarily to belong to the space of a museum or a gallery, but may occupy the physical one of ordinary life. 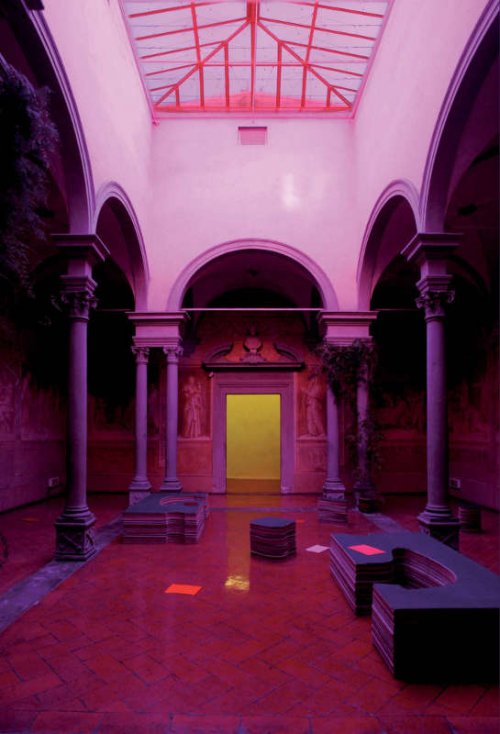 The sensorial plurality and the experiential dimension are highlighted in Il problema della condivisione dello spazio disponibile in architettura e rispetto al colore della pittura …e il pulviscolo atmosferico (Sinfonia) - The problem of sharing the available space in architecture and with respect to the color of the paint...and atmospheric dust (Symphony) (2010, Florence). It is an intervention that arises as a synthesis among painting, sculpture and architecture through music. 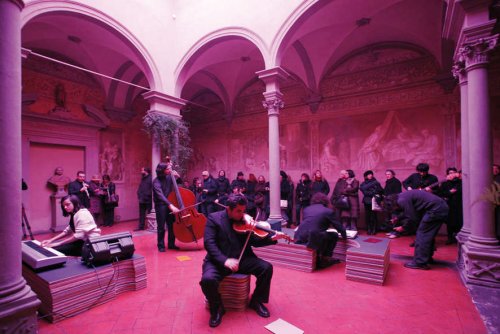 In this case, the chromatic element is built by the light, which enters the cloister filtered by colored Plexiglas panels that change the atmosphere of the space and the perception of the monochrome frescoes made in the sixteenth century by Andrea Del Sarto.

The dimension of the experience, in this case linked also to the fruition of pre-existing paints, is enriched by the music : in the day of the vernissage, twelve musicians are required to interpret tracks chosen according to as many gradations of color, chosen in shades ranging from red to violet, which compose a sort of "chromatic symphony" able to potentially evoke all possible color shades of painting. 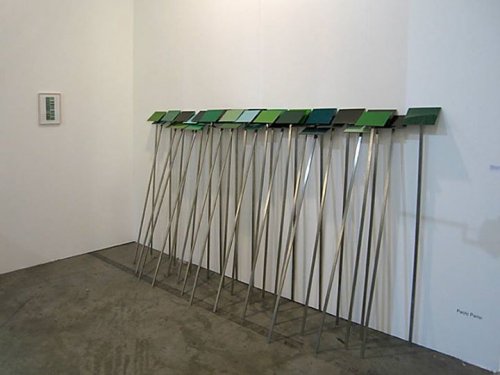 The installation lays on the same line of Nomi dei colori classici (Classic names of colors) (Florence, 2008), which is an intervention made in the gardens of Villa Romana through monochrome panels of different shades of green identified by RAL [2] mounted on beams - lecterns in front of which some musicians are called to perform songs that evoke nature. 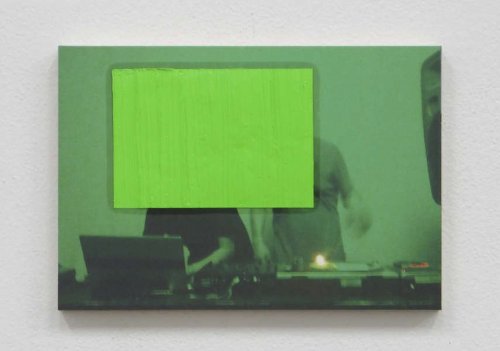 In the recent Untitled (Postcards) (2013-14), flat color surfaces overlap and alter the meaning and hide portions of sight of photographic images related to a residence the artist held at the Centre des Récollets in Paris,.

The variety of the starting images - that depict different subjects, from art to Banlieue view, from landscapes to scenes of everyday life - is almost standardized by the colored surfaces ; the gaze, fixed through the lens, combines with the monochrome oil drafting, such a symbol of individual experience. 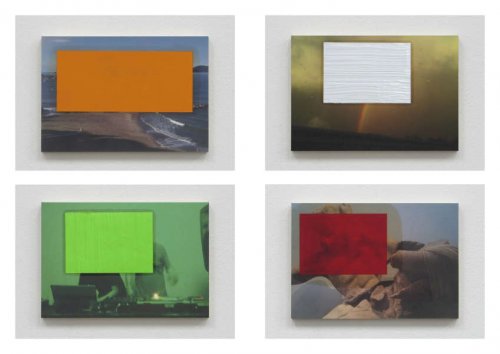 The images were merged in a video collage, composed by the random sequence of the works accompanied by the compositions of the musician from Catania Massimiliano Sapienza, AKA Massimo.

At the same time of the artistic production activity, the commitment to spread and support the arts takes the form of Base [3] a collective project founded in 1988 in Florence together with the artists Maurizio and Massimo Nannucci, Paolo Masi, Antonio Catelani and Carlo Guaita.

During the sixteen years of Base, about sixty exhibitions were made and the artists’ collective has expanded to involve eleven members, among whom were Enrico Vezzi, Vittorio Cavallini and Yuky Ichihashi, Remo Salvadori, Marco Bagnoli, Mario Airò and Massimo Bartolini, supported by the constant collaboration of the critic and independent curator Lorenzo Bruni and by the physical and emotional proximity of several other artists, architects and intellectuals.

A sharing of signs and a dialogue among languages that, alongside the didactic work of Parisi (who teaches at the Academy of Fine Arts, first in Bologna and then in Florence, since 1993) highlight the consonance with his artistic career and contribute to the development of his research, always suspended between the systematic knowledge of the mind and the imponderable spark of art.

[2] A color scale standard established by the Republic of Weimar and still in use. http://it.wikipedia.org/wiki/RAL_%28scala_di_colori%29