Accueil > Expositions > Voir & écrire > The Past-Present : The Past Called By the Present

The Past-Present : The Past Called By the Present

What does it mean to look at history from the current perspective ? 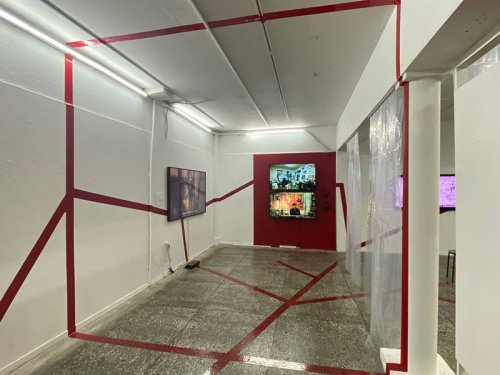 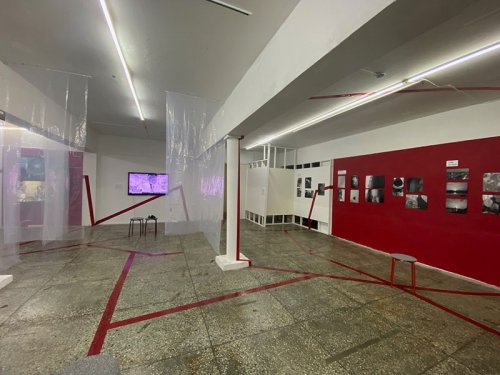 What does it mean to look at history from the current perspective ? The present retroactively creates its necessity from the past because the past belongs to the present’s constant reconstitution and reinterpretation in search of meanings. Our search for meaning not only creates new ways to see the world but also retroactively designates its conditions. Contemporary art creates new ways to look at the past.

The Past-Present : The Past Called by the Present is a group show that challenges the linear concept of time. The exhibition explores how we revisit the recent past to reconsider the ramifications of such events as war, diseases, and those involve illegitimate political power. Incorporating the memories, traces, and documentations, the artists in the show re-create the past and provide renewed experiences and memories.

First, the exhibition space called Space XX is located in Mullae-dong, Seoul. It is an area where many steel manufacturers are located, with an increasing number of cafes, restaurants, and art spaces. In the exhibition, two artists’ works show the status of Mullae-dong that went through gentrification, and the remaining trace of the military regime that fostered the steel industry in the neighborhood. 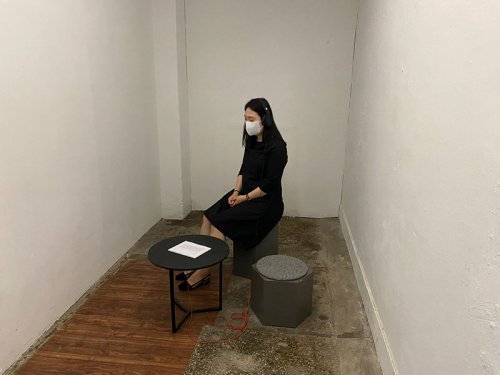 First, YoungEun Kim presents a sound that re-creates her previous work, Room 204 (2011). The work was originally created in the artist hostel Room 402 of Mullae Art Space in Mullae-dong, Seoul, where the artist stayed for three months. During her stay, the artist recorded the various noises heard across the wall and from around the building. The audience can listen to footsteps, faint voices of people, machine sounds, and other noises collected from the area. It is interesting to hear the sound Kim recorded ten years later in the same neighborhood. The sound initially recorded in 2011 is valid today as we can still hear similar noises in the district. 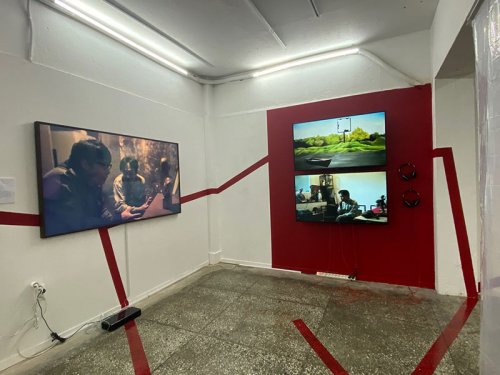 Spinning Wheel (2011) is a video work by Che Onejoon, using the modern history of Korea surrounding Mullae-dong as the main motif. The video was set in a steel factory in Mullae-dong, Seoul. Mullae-dong is known as the birthplace of the military revolution, where the Army’s 6th District Headquarter and the bunker were located, where operational meetings were held during the 5/16 military coup. Also, under the military regime, Mullae-dong prospered as a munitions factory and played a significant role in economic development. With the recent decline of the steel industry in Mullae-dong, with the support of the Seoul Metropolitan Government, Mullae-dong has changed its shape as a base for artistic activities. Spinning Wheel captures the changed appearance of Mullae-dong and the traces of the military regime that still remain. 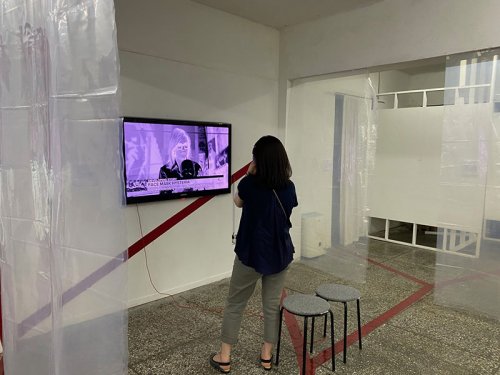 The exhibition also deals with more universal issues such as the spread of HIV/AIDS in Vietnam and the most recent Covid-19 pandemic. Early 2020, in the early stages of the Covid-19 pandemic, the World Health Organization (WHO), the United States, and Western countries in Europe advised : "don’t wear a mask unless you’re sick." I (Jaewook Lee) created You Don’t Need Masks, which is a single-channel video that reconstructs the news collected during the early pandemic. As time has passed, the wrong information has resulted in irreversible damage and numerous casualties, but past news disappears from people’s memory, leaving hate crimes against Asians. COVID-19 allows us to look back on other types of diseases in the past and how they have fundamentally changed the value of our lives. 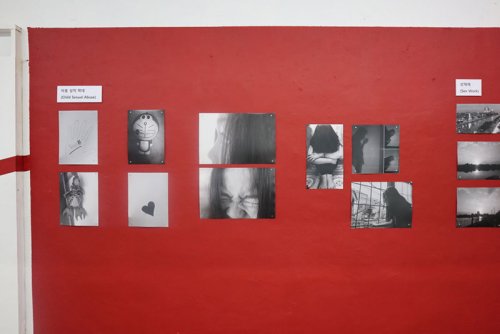 Kyoungmee Byun and Dr. Lesley Harris, Our World Our Say, 2021, c-prints © Courtesy of the Artist

The project titled Our World Our Say, developed by Kyoungmee Byun and Dr. Lesley Harris, delivers messages around human health and safety. The project explores the risk of HIV, specifically the resilience among adolescents who have been orphaned by HIV/AIDS and raised by their grandparents in Hai Phong, Vietnam. The project presents numerous photos by anonymous Vietnamese adolescents, between the ages of twelve and nineteen, in Hai Phong, Vietnam, as a part of the Photovoice Project in the summer of 2019. The Photovoice Project was part of the summer youth development program offered at a nonprofit organization in northern Vietnam, serving teenage orphans who were sent to the institution due to HIV/AIDS that their parents had. The Vietnamese teenage participants in the summer program were allowed to use photography as a means to voice their perspectives. The program called this "photovoice." There were seven photovoice sessions offered during the two-week camp duration. In the beginning, the participants received training regarding basic photographic skills and ethics when taking pictures. 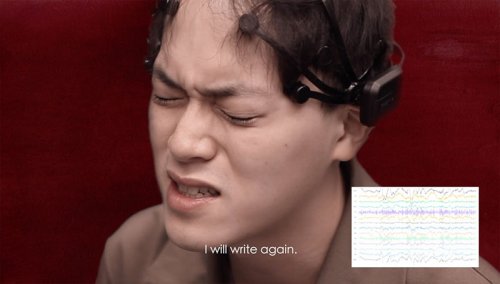 I also presented another video work called Empathic Audition (2017). The video revisits the historical letter written by Lee Woo Geun, a South Korean student soldier during the Korean War. The letter was written a day before he was killed by the North Korean troops. The letter, which was meant to be sent to his mother, was discovered on his corpse. In the video, two actors read the letter as if they were the student soldier during the war. While the actors imagine the situation of the war, an EEG (Electroencephalography) machine, a device that tracks the fluctuations in electrical processes of the brain, scans their brainwaves. When the actors feel strong empathy, their brainwaves are highly activated. Each sentence is followed by a short sequence of pictures of the Korean War being projected on smoke. The ephemeral nature of smoke evokes the concept of memory. Memory is an event of the past, but the memory stays around one’s mind even though it is not out there anymore. Sometimes big social memories like wars stay in people’s minds from generation to generation, and they affect human behaviors. Since the two Koreas are still divided, the trauma of the war still exists. The video allows the viewer to see how the actors feel the pain of the soldier. And the viewer is also able to feel the pain through the actors’ faces and voices. The feeling of the soldier in the past is transferred to the viewers in the present through the actors.

In addition, Kyoungmee Byun designed the space for the visitors to experience the show as an interaction with the entire space as well as artworks. In response to the ongoing pandemic situation, the exhibition also suggests the visitors’ movement’s overall flow to keep social and physical distance as a new model for exhibition design in the post-pandemic era. 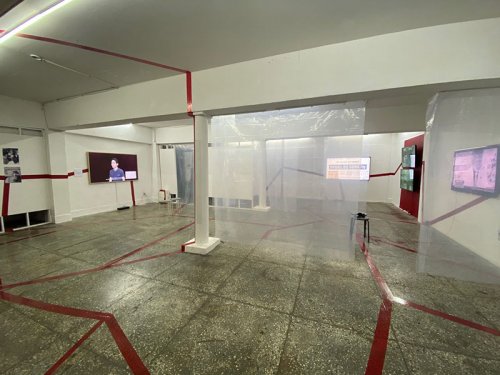