The Hypnotic Show and Memoirs of a Hypnotist

Relax. Feel every parts of your body beginning to get so comfortable. Allow other outside thoughts to drift off. Just begin to relax more and more.

Relax. Feel every parts of your body beginning to get so comfortable. Allow other outside thoughts to drift off. Just begin to relax more and more. Imagine yourself standing on the top of a stair. Ten. Take the first step down. Nine. Dream and drift downward in your own time. Eight. Feel and sense the weight of your body. Seven. As you dream and drift downward and find yourself more relaxed. Six. Time goes slowly and very comfortably. Five. Four. Three. Go further and further deep down. Two. And one. All the way down now.

This is what you would probably have heard at the beginning of the Z to C Consciousness Performance by artist Marcos Lutyens at the 14th Istanbul Biennial - Saltwater, A Theory of Thought Forms. With a highly relaxed and trance-like state, a group of people lay down on the floor inside a boat. While feeling and sensing their bodies swaying with the waves of salt water, the visitors would listen to Lutyens’ gentle hypnotic voice that guided them into inner worlds. Electromagnetic vibrations were constantly flowing through the entire brain, generating one world after another with eyes closed. While their bodies were resting, the brains were running on full speed to sense, touch, and feel the world of imagination.

The Z to C Consciousness Performance is rooted in the Hypnotic Show, an ongoing project by curator Raimundas Malašauskas and Lutyens. It has been performed in various locations since 2008. The Hypnotic Show invites people into a space on the inside, and induces them into a trance-like state. With eyes closed, scripts by artists and writers or from Malašauskas’s book were delivered to listening ears. Lutyens’ voice escorted the audiences into distinct spatiotemporal fantasies. While there were no external stimuli to be sensed except the hypnotic voice reading the scripts, each person in the audience vividly experienced sensory properties like colors, textures, smells, and shapes inside the mind. Malašauskas and Lutyens literally take “imagination” as their primary site for the exhibition. The noun “imagination” excitedly found its ancestral origin from the 14th century Latin word “imāgo” with the suffix-āgo from the base im (seen) in im-āri (to imitate), which refers to the mental imitation of what is seen. In addition, olfactory, gustatory, and tactile sensation joined together to form a meshwork of connectivity with great intensity. In his book Paper Exhibition, Malašauskas describes : In a split second a touch of smell transports you to a place where you have neither been nor have not been…. A weird feeling where the tastes of dreams-never-realized, completely forgotten, but suddenly reanimated, gets back on the menu in all its crisp vagueness [1]. 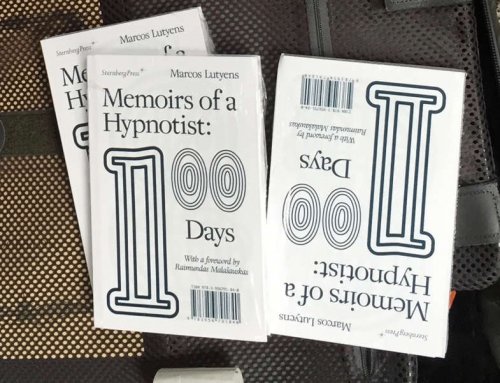 In conjunction with the performance, Lutyens published a book called Memoirs of a Hypnotist : 100 days. The book is based around the Hypnotic Show at dOCUMENTA (13) in 2012, Kassel, Germany, which lasted 100 days and involved over 300 hypnosis-based sessions. In the foreword of the book, Malašauskas describes how he met Lutyens in several years earlier, and how this new frontier in exhibition making started. Two similarly circulating neurochemical flows for artistic innovation were drawn to each other for one another, and ultimately found their paths cross in the Bay Area in 2008. The Pacific Ocean must have witnessed their meeting and convinced them that the Hypnotic Show would flourish across the continents. Yes, in the end the Hypnotic Show traveled to Kassel for DOCUMENA (13), which became the basis for this book. Throughout the ten chapters, Lutyens details the sub-conscious journey of the Hypnotic Show from his ideas to interesting anecdotes to participants’ responses. The more you read, the more mysteries and curiosities reveal themselves as if science dives into a deep artistic fantasy. The mesmerizing book design by Goda Budvytytė also enthralls our eyes. As the chapters proceed from one to ten, you probably wake up gradually from a hypnotic state, and when you reach ten, you can find yourself in a different mood. One. Slowly coming back in your own time. Two. Beginning to feel your body very refreshed. Three. Four. Feel time speeding up now. Five. Six. Coming back now. Seven. Eight. Nine. Ten.

Walking away from this whole experience of d(13), of the Hypnotic Show, of the Brain, one is left with an immense feeling of space and awe, uncluttered and alive. [2]

* Logo : the Z to C Consciousness Performance by artist Marcos Lutyens at the 14th Istanbul Biennial