Accueil > Expositions > Voir & écrire > The Cut and the Crumb

The Cut and the Crumb

The Cut and the Crumb curated by Brittany De Nigris and Adam Milner brings together artworks that construct a way of defamiliarizing our general sense of everyday objects. As the title suggests, the objects in the show were cut or torn apart from the original conditions, and the functions and meanings that used to circulate on the surface of things have gone.

Cutting is a simple act, but it can tremulously change the ontological status of an object. Borrowing Heidegger, the objects become broken tools that do not function properly anymore, as they become “something else.” The fragmented or metamorphosed objects are no longer connected to their origins. They are the signified without the signifiers : they lost the original signs that constituted their semantic meanings. Strangeness enters and plays a crucial role.

In the essay, Messiaen, Deleuze and Birdsongs, philosopher Aaron Shuster sees this notion of partial objects in Olivier Messiaen’s music and how the composer used birdsongs to create unfamiliar musical compositions at that time.

Shuster sees the partial character and emptiness as a form of manifested uncertainty as they avoid any definitive establishment of certainty. 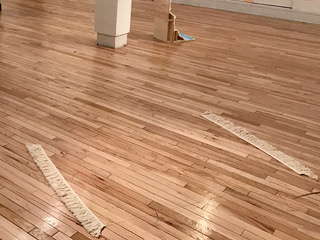 Like Shuster’s observation, Jisoo Yeo pays attention to the absence. She presents the edge of a carpet by cutting the middle part. What you see is only the outer skeleton or frame of a carpet. The central part of the carpet is subtracted, leaving the void thereafter. However, the void is not empty, but it is filled out by the viewer’s reinterpretation of the object. The true essence here is viewers’ dynamic conscious approaches towards the void. The absence becomes present. 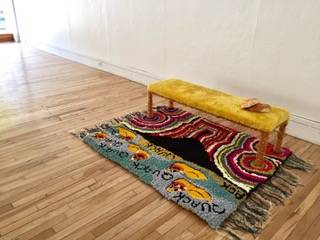 Hannah Epstein also shares the sense of emptiness not physically but psychologically. She made a colorful bench and a carpet with an image of ducks swimming in a lake. And there is a piece of bread on the bench. The audience is supposed to sit on the bench and feed the ducks with the bread. In her work, there is no visible crack or cut, but there is a psychological cut that re-directs our desire towards the meaninglessness of feeding fake ducks. Epstein cuts the symbolic structure of our desire : our desire to feed hungry ducks in a lake cannot be fulfilled. Epstein’s playful work points at the emptiness of meanings. While humor and playfulness surround the work, the void in the mind arises. 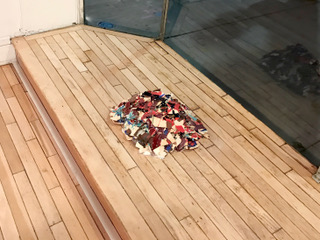 Brittany De Nigris shattered fired porcelain and terracotta into pieces and compiled them together. Porcelain and terracotta are perhaps one of the oldest materials used for making artifacts like a pot. They are often tied to their utility as functional objects. However, in her work, the clay was tortured, dissected, and torn apart. The clay lost its utility as a useful or valuable object. It becomes an object that is unsettling, uneasy, disturbing. It is poignantly poetic. Francisco de Goya had a transformative moment that he decided not to paint portraits of his patrons, but to capture the horror of the war through the Black Painting series. Like Goya, De Nigris’s object went through an ontological cut. 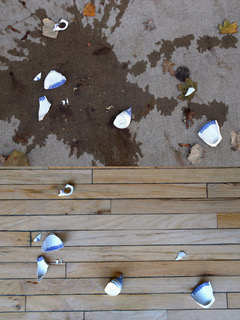 Adam Milner, Grandpa Bill was a bit of a hoarder. When he died Mom took everything he owned into our house and it felt like I was living inside his body. His urn sat near a tower of pirated DVDs from the library. (October 17, 2016), daily performance, 2016

Adam Milner creates a performance piece that happens daily during the exhibition. The audience has to search for the work more carefully because it is not highly visible, or rather, the primary audience shifts to passersby as opposed to those within the gallery. Each day, Milner stumbles outside the gallery and breaks a cup he is holding. The first iteration occurred during the opening reception, without any notice, and the performance repeats daily, as if on loop. Most times, the only evidence a viewer sees of this act are the broken shards which have been moved into the gallery. Milner seems to question about the ontology of objects outside of our consciousness. If we don’t see a cup that is falling, the event never exists for us. But things still do certain things without our conscious observation. Milner’s work allows the audience to speculate the world of things in the foreground and humans in the background. As people happen to see these moments of breakage, routines are disrupted and the everyday is ruptured or punctuated– indeed, even more so if a neighbor happens to witness it more than once. 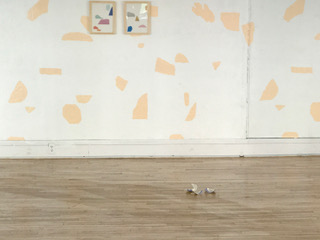 On the wall of the gallery, Jazzmyn Barbosa created fragmented images of various forms that are freed of their origins and move around like epidemic, contagion, or moving clouds. The wall painting gives the image of floating partial objects. In the show, the fragments of things are alive, vibrant, and conative. Through cutting and crumbling, objects reveal their inner vitality. 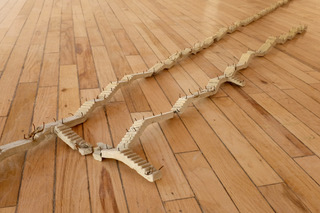