Contemporary art understands life as being...

Contemporary art understands life as being ever changing, like a flow of a river.

Artists form a reciprocal relationship with the world. Their works often become part of developing currents of thought which are still taking form. From ongoing movements like those dubbed “net.art” and “new-media art” in the 1990s, to the more recent “post-internet art,” the continuing development of digital technology, and its affect on life, has altered the modes of production of art. Today’s art schools rapidly adopt the toolkits of these emerging fields into their curriculums : art students learn computation in foundation courses ; digital fabrication tools become standard assets in art school facilities ; game designers get hired in art schools to teach digital media art courses ; etc.

Artist Isla Hansen is an artist who is continuously investigating these changing currents. She attended graduate school at Carnegie Mellon University – known for its technologically oriented art program – and recently was a visiting artist in residence at the UCLA Game Lab. But one aspect that sets Hansen apart from the “new media artists” we might associate with 1990s computational art and its contemporary reverberations, is that Hansen calls into question the notion of expertise. Hansen’s computational skills for the most part are self-taught. As a designer of games, controllers, and technological objects of an absurd nature, Hansen is a self-proclaimed amateur. Her attitude is playful ; she studies technical tools through online forums and tutorials, youtube videos, and DIY communities in order to use these technologies in applications for which they were never intended. Hansen, caught up in the fast-paced current of changing media, has foregone technical mastery of one specific language or medium in exchange for adaptability and flexibility. 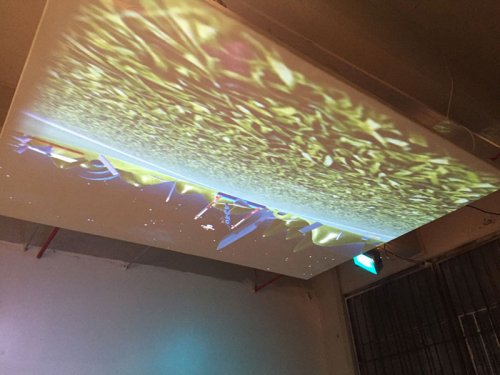 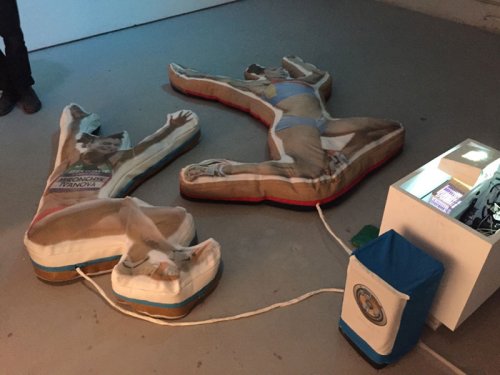 Play Dead, Hansen’s solo exhibition at Three Four Three Four gallery, run by artist Nick Fusaro, consists of a clumsy interactive video game, two body-shaped controllers for the game, a machine to automate a never-ending round of Nintendo’s Wii Boxing, and two sculptures. On the gallery floor, the game controllers consist of two images of female athletes printed on cushions shaped like the women’s bodies mid-flight. A screen is hung from the ceiling like a doorway to an uncanny virtual world. The game takes place in an astroturf-covered valley with sporting equipment and Sherman shepherds riding atop flying drones. Viewers must lie down on the cushions and look up at the ceiling to play the game. As the audience pushes down on the arms and legs of these cushions, the scene on the screen moves, the game is played. On the other side of the gallery, there is a monitor and a punching, or “speed” bag, which is connected to a Wii controller and mounted to a motor. On the monitor, a boxing game plays automatically as the punching bag and wiimote rotate together at regular intervals. Finally, on the wall, there are two sculptures that appear to take organic form. They are green fabric covered shapes, balls, and sneakers, pressed snugly into vacuum-sealed plastic bags. 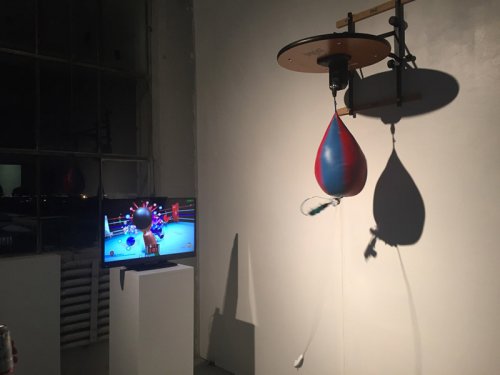 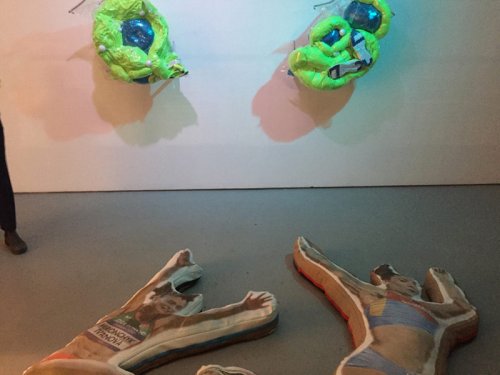 According to Hansen, her works represent “three speculative systems for infinite rounds of sudden-death.” In her own words, she takes the notion of “Game as tool and reference point, not as infrastructure or rule.” What does she mean by sudden death ? She does not answer this directly, but the question lingers with the audience. When I read the sentence in the leaflet, I imagined the sudden disappearance of people in the real world. What is left is a virtual world, a virtual reality that operates on its own based on a non-human logic. In this sense, Play Dead is frisky at first and freaky in the end. The whole thing is non-sense – like the virtual world I imagined, illogically non-human. But it is an intentionally built non-sense that, while full of humor and play, creates a sense of a void – a world void of humans.