Accueil > Expositions > Voir & écrire > Accompanying Our Own Past

Accompanying Our Own Past

Review of Accompaniment at the EFA Project Space

There is something in your work suggestive of a past as big as – bigger than – a future, a past that appears solid but is constantly being remade by your practice. We see in it a propensity to go with and attend the thoughts and works of your friends and artistic forbears. Whether in conversation with a contemporary or historical subject, your work calls to question just who is accompanying whom. [2]

The past is not really the past until it has been registered, because the past has no meaning or existence unless it remains as a record of a by-gone present. We often think that the arrow of time flies forward as the present moves away from the past and towards the future : a past event affects the present. However, according to Albert Einstein’s theory of General Relativity, there is no distinction among past, present, and future. They are always already out there all at the same time. Furthermore, recent research in quantum physics suggests a “many worlds” hypothesis : all possible alternate histories and futures are equally real within an infinite number of universes. If the hypothesis hold up, would it be possible for the present to determine the past event ? Is it possible for us to accompany our own past ? 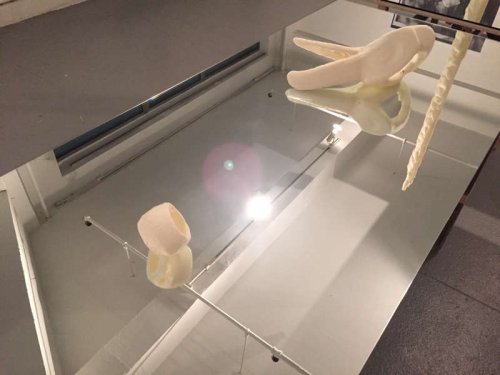 In the exhibition Accompaniment curated by Kari Cwynar and Kendra Sullivan at the EFA Project Space, what struck me first were a series of white objects displayed on tables. They looked like the bones of animal heads and some archaeological artifacts. But I did not know what they really were, or where they came from. The objects appeared innocent because I did not have any knowledge relating to the objects. The origins of the objects had a number of possible explanations. Then curator Cwynar told me that they were actually the 3D printed copies of objects by artist Duane Linklater from the permanent collection at the Utah Museum of Fine Arts. Aha ! Once I heard about the background from Cwynar, the objects took on a new condition that depended on time’s arrow. I linked their material property with the information that they were 3D printed copies of some historical artifacts from the museum : When the signified met the signifier, meanings emerged to replace the innocence the objects held in my first take. The historical meanings gave the objects the appearance that they had always already been registered in the past. 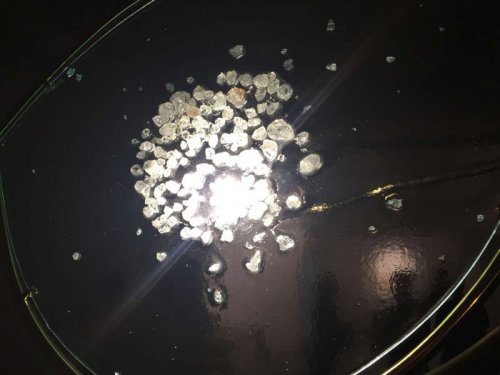 Then I walked to the side of the room, where a mysterious standing lamp, designed by artist Kara Hamilton and Angie Keefer, amazed me. The light stand with a flat glass pane in the shape of an eye projected wave patterns of light on the walls. Inside the glass pane, a collection of bumpy crystals dispersed the light. Hamilton told me that to create the lamp she had collected Herkimer diamonds, clear quartz crystals found only in upstate New York. She then combined them into a lens for diffusing the light reflected off of a daguerreotype of an unidentified man, possibly the painter Thomas Cole, and his rock collection. As soon as I heard her explanation, it collapsed the nebulous possibilities the patterns of light from the lamp afforded my imagination into a specific event taken from Cole’s life. Hamilton provided a back story that correlated with general knowledge. In other words, the past as history suddenly came into my mind and linked to what I was looking at–the standing lamp.

Jacques Lacan rejects the linear concept of time. Rather, he suggests that there are three moments of time : the moment of seeing, the moment of understanding, and the moment of concluding. As apposed to chronological time, his psychological time always acts in reverse : the present retroactively affects the past event a priori, because the past belongs to the present’s constant reconstitution and reinterpretation in search of meanings. In his book Absolute Recoil, Slavoj Žižek also argues how the Symbolic realm retrospectively structures past events :

How is this circle of changing the past possible without recourse to time travel ? The solution was already proposed by Henri Bergon : of course one cannot change the past reality, but what one can change is the virtual dimension of the past - when something radically New emerges, this New retroactively creates its own possibility, its own causes or conditions. A potentiality can be inserted into (or withdrawn from) past reality. [3]

We historicize the transcendental dimensions of a past event. As Heidegger would suggest, our consciousness designates the past event as an epochal disclosure of being. In other words, knowing is how the past discloses reality to us in the present.

The idea that knowing determines reality is what philosophy shares with quantum physics. The “Delayed Choice Quantum Eraser” experiment shows that measurements performed in the future can influence the present and the past. Photons can behave as either particles or waves, but not both at the same time. Our very act of observation causes the collapse of photons into particles from waves of possibilities. The “Delayed Choice Quantum Eraser” experiment further suggests that our knowledge of how quantum particles behave in the future determines photons’ own pasts. As strange as it sounds, retro-causation is gaining ground in science and contemporary thought. That is to say, our past is not fixed. Perhaps, we are always accompanying our own past, affecting and being affected. This different notion of time could become central to understand the fundamental nature of reality.