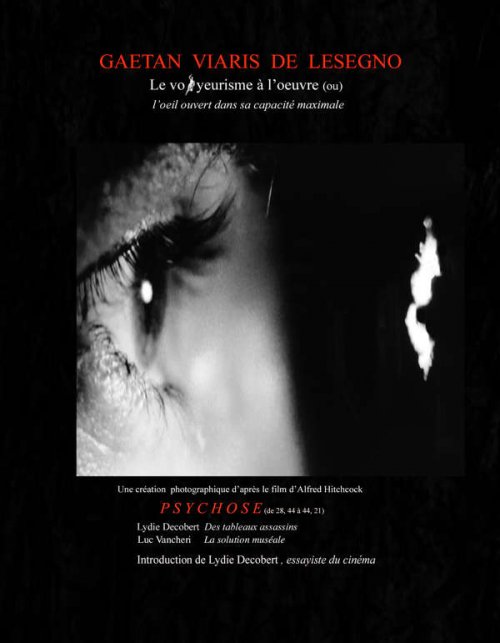 Norman looks at Marion through the hole in the partition, his eye becomes huge, it occupies the whole screen, with the light that filters in its direction. Hitchcock, showing that primitive game of optics, abruptly returns the spectator to his situation of privileged voyeur. 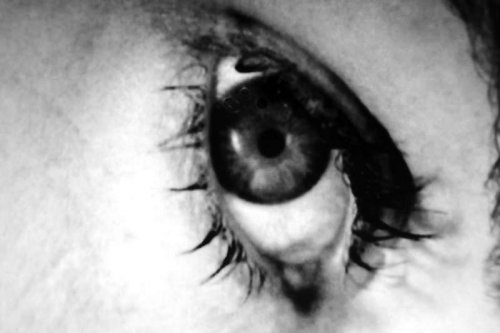 Psycho (1960) opens on a slow aerial tracking shot leading to a building window. Our intrusion by a narrow space arranged between the lowered blinds and the frame of the window, a break-in of the camera-eye in a room ; immediately sends us back to our voyeurism. We watch Marion Crane (Janet Leigh)in white bra long before Norman Bates (Anthony Perkins) scrutinizes her in black bra. [1]. »

The hotel of the first sequence prefigures Norman’s motel : at the dark interstice echoes the bright daylight, flowing out through the hole in the partition, an observation post set between the receptionist’s boudoir and the room n° 1.

The sequence around this daylight, a suggestive "slit" hidden behind a painting in an intervening and caulked room, attracted Gaëtan Viaris de Lesegno’s attention all the more so because the painting in question, a copy of a painting by Willem van Mieris (flamish XVII), refers to the iconography of "Suzanna and the Elders".

The meeting with the work of Jean-Claude Prêtre, Suzanna, the trial of the model (Bibliothèque des Arts, 1990), which lists 173 paintings on this theme, echoed his black and white photographic interpretation of Western painting, result of a research work under the direction of the image theorician Jean-Claude Moineau in the department ’Image Filière photographique’ of the University Paris VIII (Vincennes), a constantly renewed search year after year, painting after painting.

His photographic creation plays with the framing, more precisely the re-framing practiced on painting and on the treatment of colors in black and white values. The arrangement of a black and white sequence, managed by a clever use of light and shade effects and referring to painting, could only seduce the photographer and lead him to a re-reading of Alfred Hitchcock’s cinematographic work.

Gaëtan Viaris of Lesegno puts voyeurism in relation with the problematic of the spectator’s view of the painting, through the pictorial representation ; he brings out a judicious questioning : who is the voyeur in this iconography of Suzanna and the Elders,

The staging of the anguished waiting is indebted to the power of the look : the Hitchcockian suspense does not proceed, as Griffith or Welles, from an acceleration and a violence imposed on the duration by the editing, but of a slowdown and a decomposition of natural time obtained by cutting. The mechanism is not "parallel or alternating editing, but the field-backlight, which plays the eye," writes Pascal Bonitzer. [2]

The photographer recuts somehow the initial cut and details it in his photographic creations, this from the opening credits (visual 2).

The first two images make us the voyeurs of Sir Alfred Hitchcock (via Anthony Hopkins), then the voyeur : the extension of the eye to the entire cinematic screen, its opening in its maximum dimension, to use the words of Gaëtan Viaris de Lesegno, makes it obscene. The eye, metonymic figure of the knowledge of the other and symbol of the creator, brings the act of looking into play. Then we see through the voyeur’s point of view, and we look at what we shall not look : in a blind field, Marion, slightly anamorphic, undresses, placed as the Suzanna of the next image suspended in a black pit.

Gaëtan Viaris’s digital seizures revolve around the game of looks, that of the characters like that, indiscreet, of the spectator : he visualizes and makes feel an incessant circularity between the image and our eye, synthesized by this "O" inscribed (underlined by David Sterritt in his book The Films of Alfred Hitchcock Cambgridge University Press 1999) in filigree (visual 5) that haunts the film, the filmmaker... and the photographer.

To catch the imperceptible

Douglas Gordon’s Video installation, 24 Hour Psycho (1993), originally presented at Oxford, an extreme slow-motion projection of Psycho, highlights the Hitchcockian mechanism : the film being stretched over a day, the hypnotic slowness makes it possible to dissect the slightest attitude, to dismantle the mechanism of tension, violence and terror. Aimé Agnel evokes in an essay "the very slow, almost meticulous time of this film, by the only game of images and sound [3]”. Digitally capture the feverish course of Bates’ hand before seizing the fateful key of the traveler’s trap (visual 8) or capturing de Meiris painting of Suzanna gradually engulfed by Norman’s shadow, revealing a deep black which announces the burial, belong to the same intention. (44’01 to 02, visual 14)

The visual addition of a tiny Suzanna in the excessive frame of the "evacuation" hole of the shower (visual 3) that Hitchcock makes coincide with the dead eye, instantly states "infigurability" of the biblical scene ; the essential difference between the figures of Suzanna and Marion is the absence of intercessor. The derisory final gesture of the heroine shows the caducity of the pictorial theme : stabbed to death, the back pinned to the wall, the heroine slides frontally along the partition and stretches the right arm out towards a voyeur and helpless spectator (47’37), open palm and fingers spread. 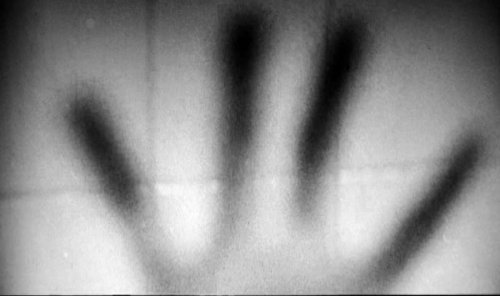 The mise en abyme captured by Gaëtan Viaris is all the more frightening as the representation and the values ​​it conveys are destroyed. 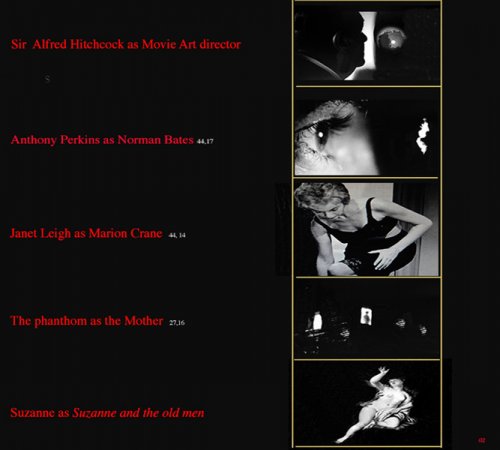 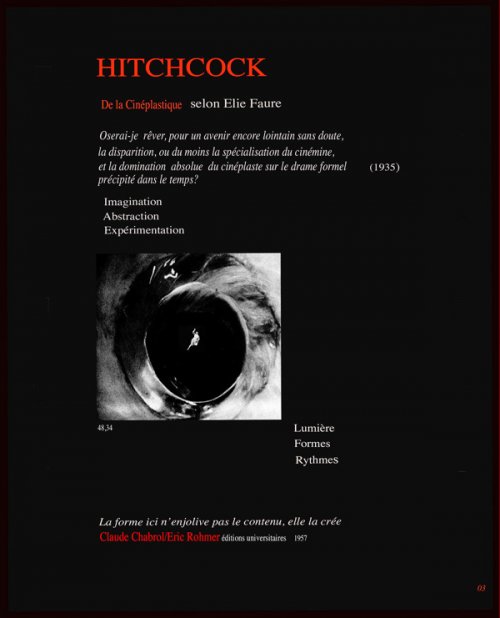 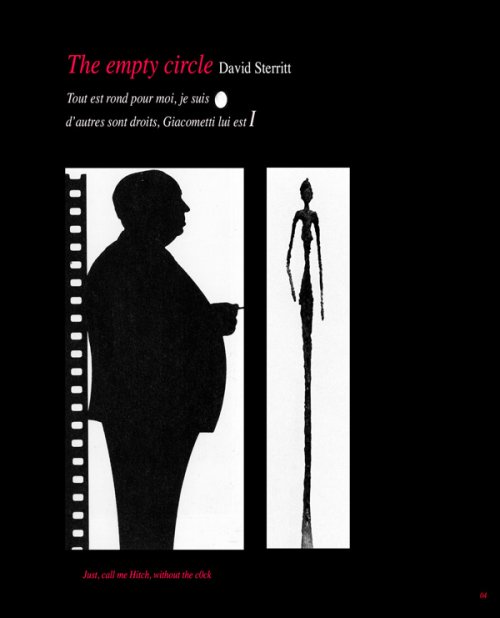 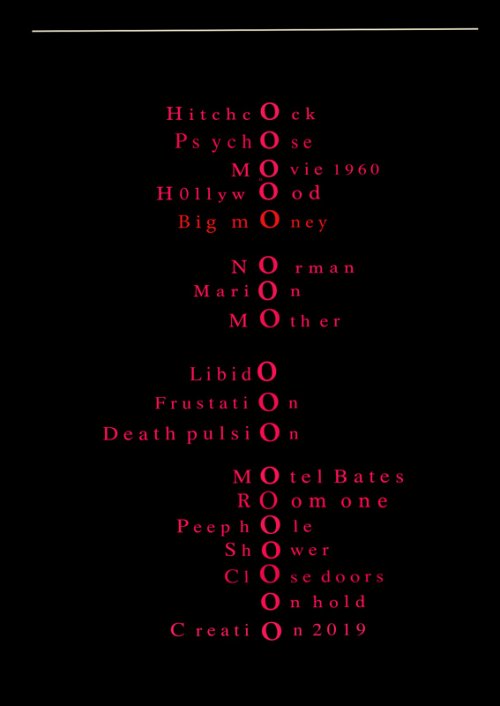 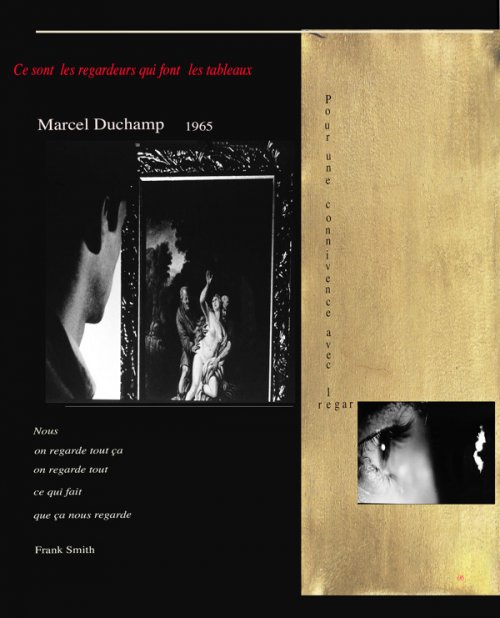 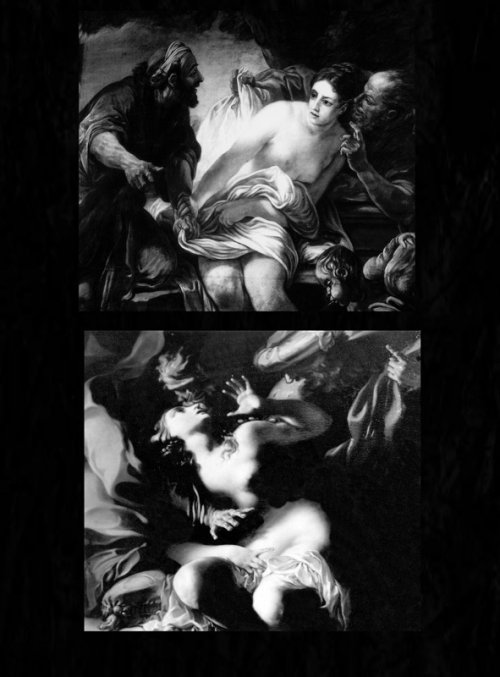 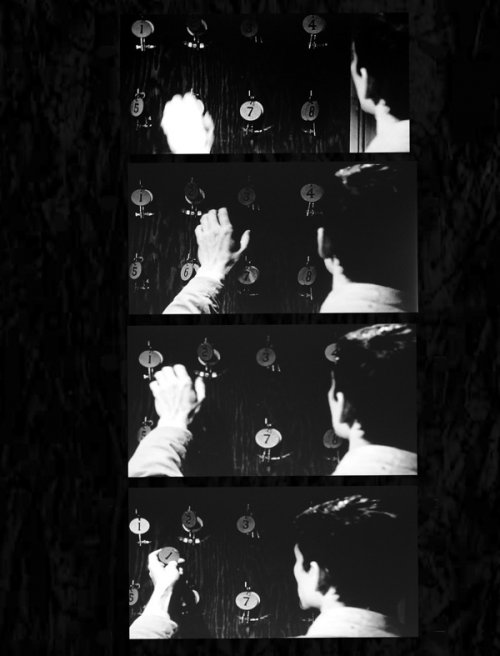 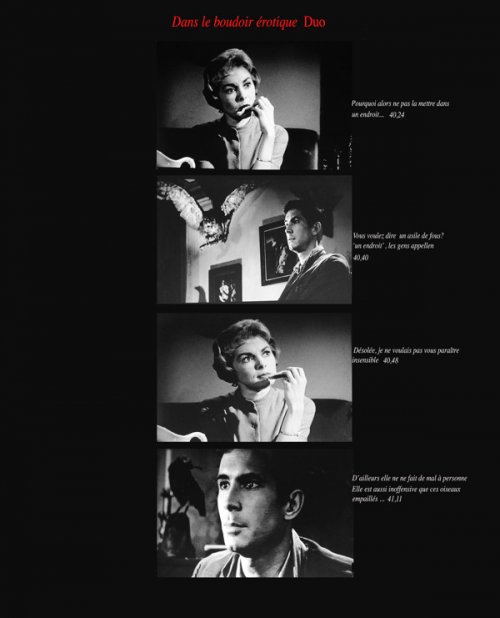 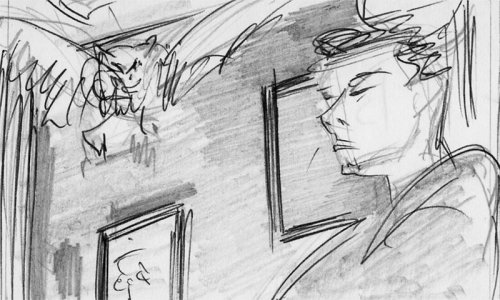 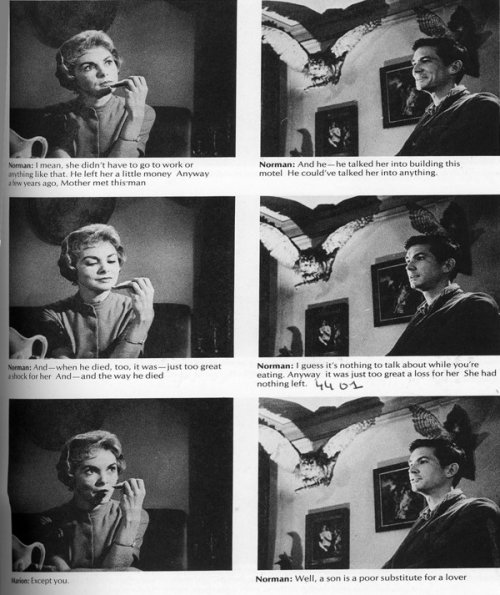 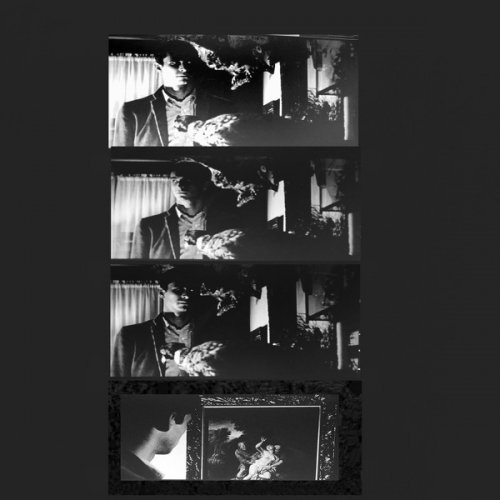 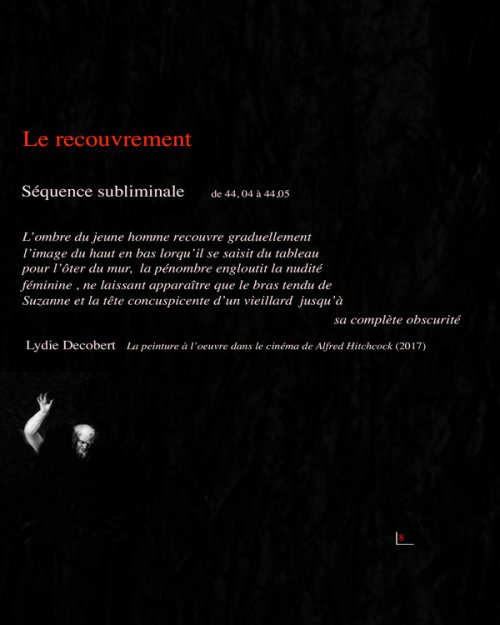 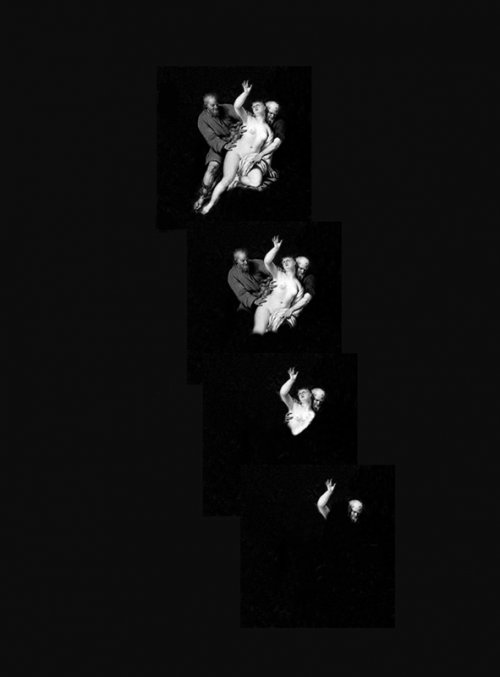 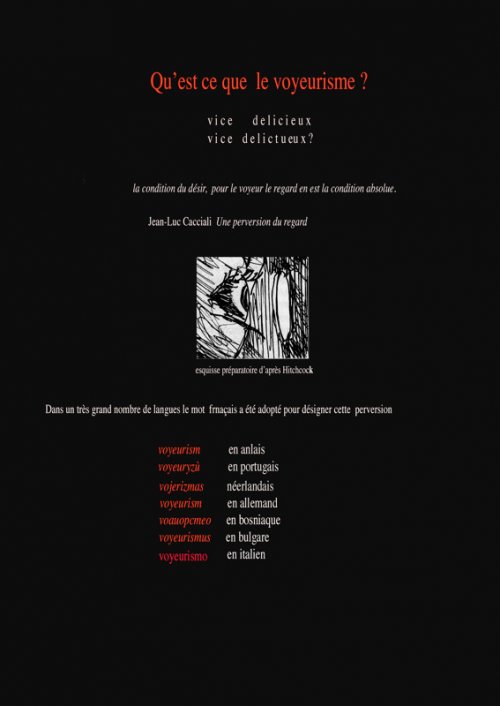 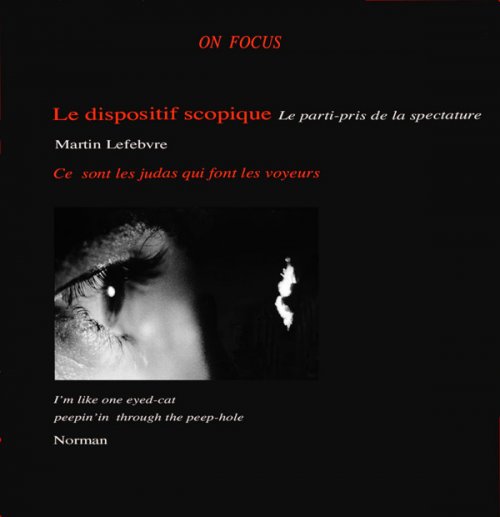 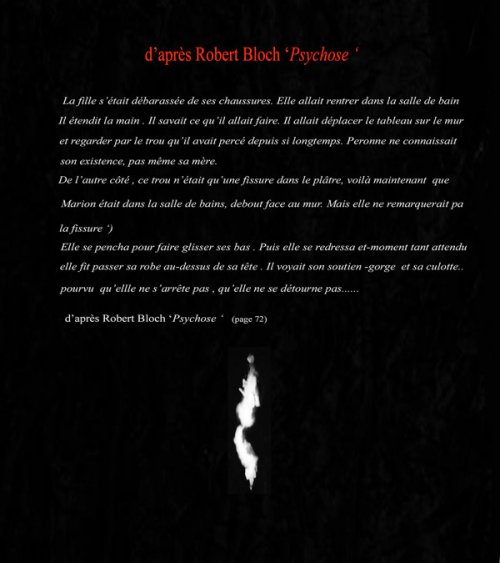 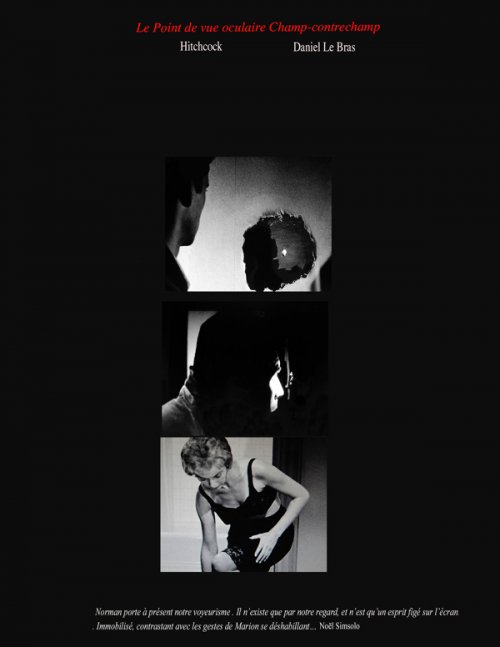