Treatise on Rhythm, Color, and Birdsong - Part I

The present retroactively creates its necessity from the past, because the past belongs to the present’s constant reconstitution and reinterpretation in search of meanings.

How is this circle of changing the past possible without recourse to time travel ? The solution was already proposed by Henri Bergson : of course one cannot change the past reality, but what one can change is the virtual dimension of the past – when something radically New emerges, this New retroactively creates its own possibility, its own causes or conditions. A potentiality can be inserted into (or withdrawn from) past reality [1]. – Slavoj Žižek

The present retroactively creates its necessity from the past, because the past belongs to the present’s constant reconstitution and reinterpretation in search of meanings. Our search of meaning not only creates new reality but also retroactively designates its conditions. For example, Other Primary Structures was a recent exhibition at the Jewish Museum in New York City in 2014, which revisited their historical 1966 exhibition Primary Structures : Younger American and British Sculptors. The 1966 show surveyed the works of Minimalist artists such as Carl Andre, Dan Flavin, Donald Judd, Sol LeWitt, Walter De Maria, and others. Almost half a century later, Other Primary Structures presented works by renowned and lesser-known artists of the 60s from Africa, Asia, Latin America, the Middle East, and Eastern Europe. These international artists also sought extreme formal reductions, but from a multitude of diverse perspectives. In this sense, Other Primary Structures has altered and expanded the discourse of art history by incorporating a more global scope. The recent extensive globalization of the art world has pushed art history to re-designate its conditions more broadly. As with Other Primary Structures, the task of this series of essays is to reconsider artists and creative practitioners in other fields who have been underrepresented in the art history canon not because they are less important, but because the hegemonic historical narrative has marginalized them. It is, therefore, introducing a new vantage point and set of implied relationships that bring new significance to the belittled actors of the world in the new epochal dispensation of the 21st century. 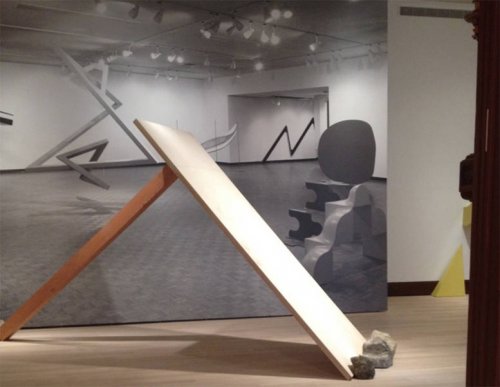 Other Primary Structures at the Jewish Museum, New York

The title of this essay series is Treatise on Rhythm, Color, and Birdsong, which borrows from the title of composer Olivier Messiaen’s seven volumes of music theory, Treatise On Rhythm, Color And Ornithology. Messiaen is one of the revolutionary composers of the 20th century, and his treatise describes the theory for his compositions, how he incorporated birdsong, the relationship between sound and colors, and new scientific ideas of his time that relate to his conception of rhythms and time. The composer fearlessly sought resources from other fields of knowledge, creating different nodes of connection with the world beyond the grand narrative of music history. As is the case with Messiaen’s approach, this essay attempts a new vision of the world as a node of connections among seemingly disparate fields of knowledge, retroactively creating more open conditions by incorporating other actors of the world from the past.

In the 20th and 21st centuries, scientific revolutions, such as general relativity, quantum mechanics, and new discoveries in neurobiology, have dramatically changed our view of the world. What seemingly made sense in the past does not make sense any more. For example, according to Albert Einstein’s general relativity, our foot is slightly younger than our head because our foot is closer to the higher gravity : time flows slower below than above. Time and space are not static, but rather flexible. In quantum physics, the laws defy common sense and extend our minds to the limit. Two subatomic particles can interact with each outside of space and time. This phenomenon is known as quantum entanglement, to which Einstein famously referred as “a spooky action at a distance.” One subatomic particle can be in multiple locations at the same time. These strange rules of contemporary physics stretch the minds of scientists and artists alike, and blur the boundary between the rational and the mythical. The more we know about Nature, the more we know what we don’t know. The radical post-Newtonian world inspired a few artists in the 20th century. They tuned into to a new frequency, as it were, still faint and unheard by most, and entered into a reciprocal relationship with this strange new world in which they tried to affect it as much as it was affecting them.

The first artist I would like to shed light on who heard this new frequency is Remedios Varo (1908-1963). Varo was a Spanish-born Mexican painter. For most Americans, she is perhaps one of the least-known great Surrealist painters. Her paintings do not quite fit the received narratives of Surrealism. Although she had a close relationship with the Surrealist community, she did not follow their techniques at that time, but developed her own way. Varo based her Surrealist conceits not on the irrational contents of the unconsciousness or sexual suppression, but on 20th century scientific speculation, and mysticism. Through her painting practice, she engaged with some of the most revolutionary scientific theories of her day—from Einstein’s general theory of relativity, to astronomy, to Darwin’s theory of evolution. She did not simply illustrate those ideas but rather used them as a springboard to expand her imagination. She poeticized science. 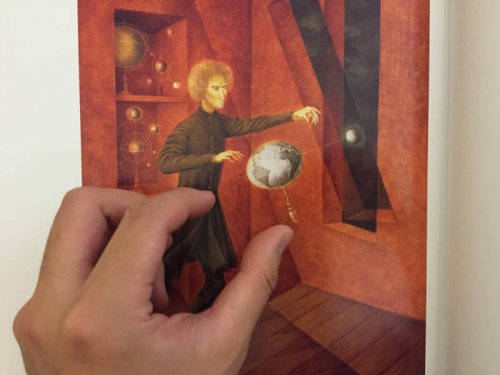 JaeWook Lee’s fingers on Remedios Varo’s The Phenomenon of Weightlessness, 1963

In the many-worlds interpretation of quantum physics, there are an infinite number of different universes that all co-exist, known as the multiverse. This theory suggests that some universes would be nearly identical to our own with slight differences. Other universes may have greater variations, where we would exist but with different jobs, friends, and journeys of life. In one of Varo’s paintings, The Phenomenon of Weightlessness (1963), a man is practicing magic with free-floating globes of the earth and the moon in the middle of a room. In the background, some globe models of the solar system are displayed on shelves. In addition, the room is duplicated in a slightly different angle and overlapped with the original. It seems that the man is creating two variations of the world that are about to split. In Three Destinies (1956), an invisible apparatus operates to create three different lives of a person. The three lives of an individual with different careers exist in same space. Of course, in early the 20th century, Varo was not able to predict the scientific theories of today. However, retroactively, her paintings indicate surprisingly recent ideas of quantum physics. 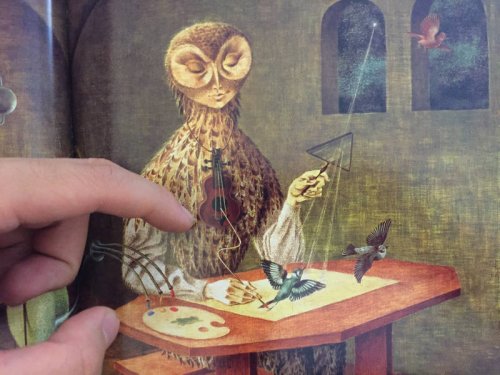 JaeWook Lee’s fingers on Remedios Varo, Creation of the Birds, 1957

According to string theory, everything is made up of tiny strings vibrating through extra dimensions. Subatomic particles are like musical notes of cosmic sound resonating through eleven-dimensional hyperspace. Varo may not have known about string theory, but her intuition seemed to vibrate in tune with the frequency of the new worldview. Varo also used music as a metaphor for invisible vibrating ingredients necessary for the origin of life. In The Flutist (1955), a flutist stands outside a canyon area, constructing a tower consisting of ancient fossils such as spiral ammonites, trilobites, fish, and leaves by playing the flute. The sound of a flute reconstructs the geological time before the Holocene Epoch, the world before humans, reminiscent of Darwin’s evolution theory of life. In Creation of the Birds (1957), a half-human/half-owl woman paints with one hand holding a paintbrush that extends from a violin hanging on her necklace. In her other hand, she holds a triangular magnifying glass that refracts light from a star onto a piece of paper where painted birds come to life and fly away. Varo suggests here that the prismatic colors are necessary for the origin of life, and creates a conceptual knot between colors, music, light, and life itself. They are all vibrating waves that are actualized in our brain. Synesthesia “awakens” in the viewer’s mind.

The current scientific accounts of the world can retroactively help us understand art of the past more broadly. As the nature of reality appears to be more weird and mysterious today, the strange world of Varo’s paintings becomes more appealing than before. This essay is a retrospective attempt to shed light on Varo’s prophetic accomplishment, which lies not in the tradition of the art historical canon, but in the network of connections between art, music, science, and mysticism. This mesh of links allows the sphere of art and its historical narrative to become more receptive to the influx of new interpretative streams.