Accueil > Expositions > Voir & écrire > Until recently, a military confrontation has...

Until recently, a military confrontation has...

Until recently, a military confrontation has existed between North Korea and South Korea without a clear compromise since the Korean War. At the verge of the World War II, the Korean War started in 1950, and the armistice agreement was made between two nations in 1953.

The armistice has not been a permanent peace treaty but suspended open hostilities. Since then, all South Korean males have to serve for the military for about two to three years or do equivalent duties when they are early or mid-20s. From news media or instructors of the military boot camp, they’ve heard stories about spies coming from North Korea, the underground tunnel near the border made by North Korea, and political plots, among others. At the same time, young men of South Korea have experienced rapid modernization and the emergence of entertainment cultures such as TV shows, pop music, video games, and digital animations, among others. This postwar tensions and global capitalism have affected deeply in the mind of most Koreans who were born after 1970. For the last 70 years, Koreans have heard about the ballistic missile tests conducted by North Korea once in a while. At the same time, they have had a busy life, making a living and enjoying their spare time listening to K-pop, doing video games, golf, etc. On the one hand, Koreans live with the constant military threats so that they became insensitive about the dangers. On the other hand, they are modern citizens residing in the neo-liberal capitalism. Sung Rok Choi is one of them. Choi is a South Korean artist who grew up enjoying video games and animations. Like any other men in South Korea, Choi also finished his military duty. 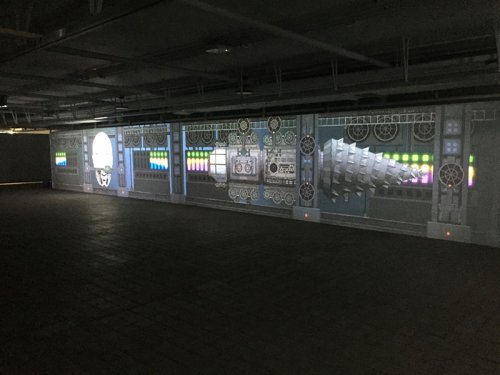 At the Seoul Museum of Art Bunker in Seoul, Choi presented the finalized trilogy of Operation Mole-Final Stand series, a multi-channel immersive video installation. The title borrows from a popular video game, which is a first-person shooter video game of military actions of historical and modern warfare. Unlike the video game, Choi’s work presents a series of 2-D animations, using Adobe After Effect. At the beginning of the latest version of the animation series, a robot and a tank with a massive drill in the front are being constructed in a dark factory. Then, a solider appears. It seems he is operating the tank, drilling underground. Then the screen invites us a vast field of view of a military camp with lots of events happening at the same time in different locations such as manufacturing the robot, drilling the ground, a drone flying, etc. From the ground, a strange-looking creature comes out, and the army tower starts to attack the beast. The beast gets angry and fights back. It destroys the army base. A nuclear bomb is dropped, and everything is gone except the beast. The beast moves and continues to destroy things around him. Then the beast metamorphoses itself into a mystical creature that looks like a phoenix. Seoul is being torn apart by fire coming out of the mouth of the phoenix, while people in the street seem to be undisturbed. The tank shown in the beginning follows the phoenix and kills it. The video ends. 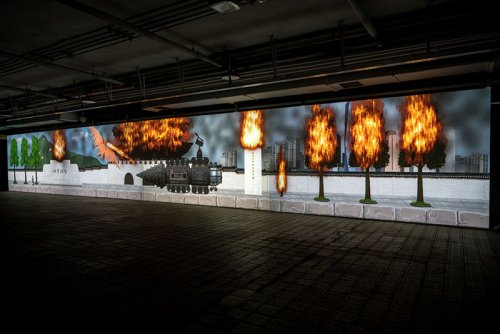 The phoenix in Choi’s video seems to be a symbolic creature residing in the mind of most Koreans. Choi’s Operation Mole-Final Stand reflects the paradoxical condition of modern Seoul : it reminds us of the obligate course of action that every man has to do for two years in the military and the psychology of Koreans living in contemporary life regardless of the threats or the potential war. No matter what is happening around us, we are just looking at our cellphone, watching video games.