He made three types of choices to overcome these limitations : he changes the material ; radicalizes his perception of space and develops an “other” consciousness of space, and he is going to “swing” his lines. To be exact, he is going to take a big bet, that of pushing the question of balance beyond the practicable limits known to him, designing sculptures not stretched in height towards the skyline but in “width” in relation to the horizon.

There is no primacy of one aspect or another. It is because each of them is one aspect of the problem that they are already in resonance. It is also why it is possible, by modifying one of them, to make emerge a new tonality in one or other plan and, in this way, to extend the resonance. A process of transformation of the work takes place. The first decision is to “close” the structure of the shape, that is to say, change the ratio of the material, not to abandon the steel but to close the H section steel with flat iron for a better physical resistance of the line and giving the illusion of using pipes of rectangular section. 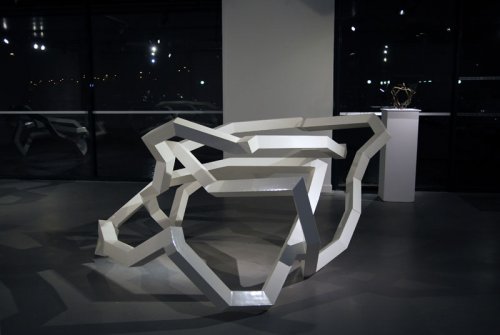 The artist obtains a much better resistance, therefore a better range for each line : he is able to implement his specific technique. The experience done on the work that does not hold with an open shape turns out to be positive, since it is quite feasible with a closed H. Another vision of space it is then made possible and another way of looking at the work is essential. By closing the H-section, which we will call square H, the marks of his work disappear, that is to say, the fact that when we are in front of his work, we would have the impression of seeing in them all the stages of their production. With the square H, it all disappears. The work no longer bears traces of its manufacturing. It stands in space in front of the spectator, as a work of art, even if it is still a technical object revealing the conditions of its manufacture.

The work recovers part of its magic ; even if what we do not see any more needs, in fact, an amount of work twice as much as before. The most important is that these changes give way to new combinations between the lines. The essential point here is its poetic order. An emotional, perceptive and intense experience enters in résonance along with all the problems Nicolas Sanhes is confronted with and has to deal with. It takes place on the vast beaches in northern France. This experience has a name : The Open. All its power of expression is given to this word in the book “The Duino Elegies” by the poet Rainer Maria Rike. It sends back to the articulation of two original experiences : that of astonishment before the world, heaven and earth together, and that of covering this original experience that survives inside each of us as an occult souvenir. It is only when we find ourselves confronted with our own individual experiences that we are able to find it wihin ourselves ; it is like a conscious reawakening on the first morning in the world. 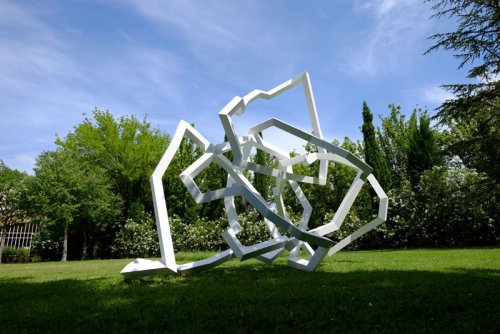 Nicolas Sanhes had this conscious experience in Dunkirk (France), where he was invited as an artist in residence in Grande Synthe, in 2010. On these vast beaches, he found himself face to face with the infinite stretch of the horizon. A line that separates and unifies both inside and outside ourselves, heaven and earth.

This experience is that of “the open”. It is similar to the experience of Rilke on the tiny balcony hanging on the walls of the Duino Castle, when he had the impression of advancing directly into the indefinable immensity of the Adriatic. Experiences such as these make us question the perspective of space. What is experienced in what is “seen” is a double and contradictory experience.

First, there is the freedom of the confinement, the one in which the artist remained mentally, that carries the memories of his native region, with its “enclosed” landscapes that influenced his metal Works pointed to the sky. Then, like a gift, he is face to face with a new dimensionality, in which the point is no longer a vanishing point : and the horizon is no longer limited to the mathematical space. The point becomes a living structure where the horizon is the crack and the link, the infinite stretch and the sign of the relationship. It is at the transcription and the plastic implementation of this radical experience he will use, driven by the double discovery of the possibilities that this new material has to offer, on one hand, and, on the other hand, by this vision of a space no longer responding to the conventional standards of determining space.

It was now possible to give an existence to the line in function of the central element ; element that is at the same time motor and matrix, named the vacuum. Therefore, the line is no longer thought of as the vector of a gushing force, but as a double horizon, the bearer of the experience of the open.

The line becomes an open source, on the condition that the open is captured, not just, beyond the paradox, but also captured in the interlacing lines. This capture is a form of expression. The line becomes a vector of an original expression of the original expérience of pure space as “open” space. It involves a loosening of sight of what is to project beyond the limits of perception.

Perception stands on the border of reality. It consists of the perceived inclusion of the reality in the actual experience. Another expérience is possible, arising only from the resonance between questioning and a pre-existing reality. Facing the horizon, each of us stands asthe first man stood.

In light of this experience, Nicolas Sanhes will start thinking of his work as lines stretching in width, as much as a confrontation with the open and as an attempt to make the vacuum exist as it is the “place” where any perception unfolds. 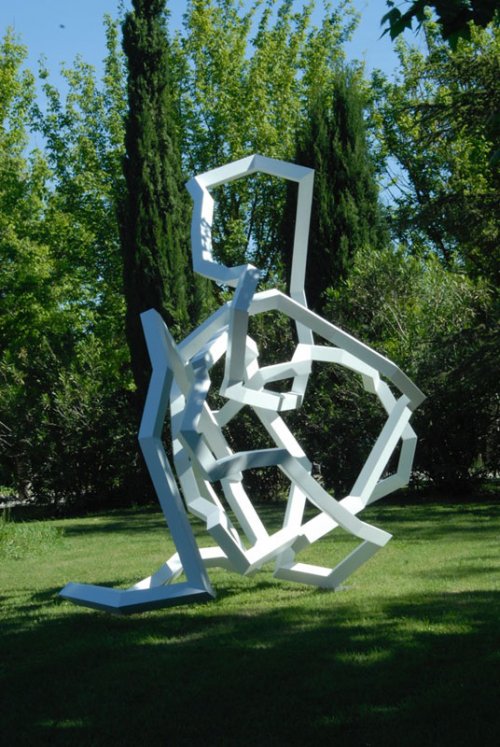