Accueil > Les rubriques > Cerveau > The Stone of the Heavens

The Stone of the Heavens

Some stories bring forth images, clear and suggestive, like film sequences. That which is told may seem incomplete and fragmentary, but images come forth. Maybe it is the incomplete and lingering question marks that strengthen the image ? In the artwork The Stone of Heavens I have tried to approach a story that I was told years ago, a story that has stayed with me since. The work consists of staged photographs that have been shot at the place where everything happened, and the research I have done around the story.

Easter Day 1898 was a cold and overcast day with bad weather approaching Småland that would bring plenty of snow during the night towards Easter Monday. In the early hours of dawn they had walked up to the stone, a lonely remnant from the ice age in the parish of Dörby, west of Kalmar. The stone is located on a small hill just alongside a forest road some one hundred meters from Norra Videmossen, a farm where only the foundation of the houses remain today. From the stone they would surely be seen, this morning when Christ would come to bring them home, this small group of the holy and chosen. Towards the evening of Easter Day there were those knocking on the door of Gustaf Nilsson and his wife Emma who lived with their children in the cottage “Kärr” (direct translation of the name is “swamp”) not far away from Norra Videmossen. Outside the cottage stood a number of frozen, hungry and disillusioned beings who had given up all earthly belongings and now only owned the clothing that they stood in. After a number of hours of waiting they had to realize that no one would come to fetch them, their journey to the heavens had been cancelled. 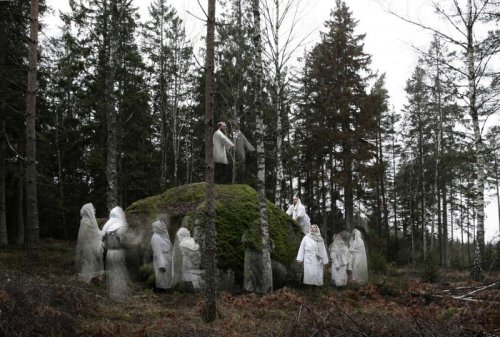 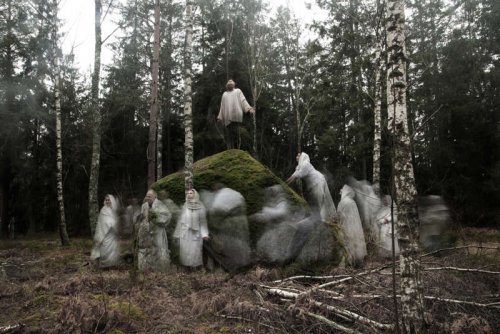 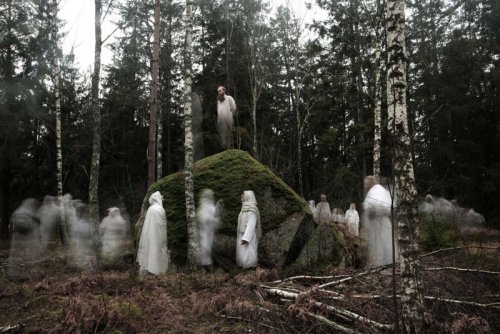 The story of the people in white clothing that awaited their ascension to heaven has remained as a local story in these areas of Småland. After having done some research among the elderly in the parish I came into contact with two sisters, the grandchildren of one of the sons at the cottage “Kärr”. They had heard the story of how the congregation of white clothed people had come to ask for food when the waiting on the stone showed up to be in vain. Was it possible to attain some details of who they had been ? What had caused them to do such a thing and was it true that they had given up all “earthly ballast” of money and other belongings ? I started by searching old church documents and newspaper archives. The small group at Videmossen are nowhere to be found but in old newspapers I find almost identical stories from various places around the country. It seems that a doom prophecy was spread among nonconformist circles during the years 1897-1898.

“That predictions of the end of the world this month have won followers among the nonconformists shall be tied to wandering priests, that have travelled around and have preached of the oncoming doom’s day to many a congregations, which seems to have caused such an effect in certain places that those present were so shaken that they fell from their chairs and asked the speaker to assist then in order to escape the wrath.” (The newspaper Smålandsposten, 7th of April, 1898.)

Several daily newspapers reported with sarcasm about the “asylumlike” believers that awaited doomsday. “The end of the world was awaiting some ten women in Åvik of Hudiksvall” and “On a mountain outside the city a number of city folks robed in shiny white clothes were waiting for their ascent to heaven. They waited and waited and after having waited for six hours they got hungry and started walking home, fooled and disappointed. From a place in the region of Dalarna it was mentioned that a soldier that lived there ever since Christmas was certain that the latter day would take place around Easter and therefore he had not worked at all during this time even though he had a wife and several children. He had what he felt was enough to live on until Easter. But now we think he will need to go back to work.” (The newspaper Kalmar, 16th of April, 1898.)

“The other day a person from Nordingrå parish in the region Ångermanland was convinced that the time for doomsday had come, and in order to ascend to the heavens the person dressed in a green shirt and started to climb onto a barn room so that the journey would not be too far. The journey into the air was however quite pitysome, as he started to make movements with his arms to ascend into the heavenly skies and the man fell right into a heap of manure. A healthy antidote to doomsday profets !” (Newspaper Aftonbladet, 20th of April 1898.)

The Pentecostal pastor Fredrik Franson (1852-1908) was born in Pershyttan in Nora. In his youth he emigrated to America after having discontinued his teaching studies in Örebro. Together with his brother he became a farmer in Nebraska. After a long illness Franson went through a religious crisis which was followed by him becoming a preacher. In Chicago he met the preacher Moody who became a master and source of inspiration. Franson is described as a “truthful Franciskus type without any other belongings than his worn bible, his simple suit, his handbag and his umbrella, always zelous, all fire and flames. The small, dark haired, thin and pale man that captured his audience with his intensive and penetrating gaze and with a fiery speech of the soon approaching apocalypse. Franson, who also was called “The Fire Prophet” was a well-travelled man who had, after having learned the language, travelled around and preached in Germany. He also visited Italy, Palestine, Egypt, India, China and Japan. After years of travelling around he returned to Sweden in the summer of 1897 and also here this charismatic bringer stirred up emotions within nonconformist circles. In his book “Himlauret” he reports on his calculations of the end of times through using the bible quote “On day with the Lord is a thousand years”. Franson also calculated through using the hours of the exact time that Jesus spent on the cross and thereafter in the grave. Through these he came to the conclusion that the latter day was very close and approaching, however he failed to give an exact time. Franson suggested the Easter week of 1898 and the coming weeks of Easter until the return of Christ would be a special week of prayer. This was misinterpreted by many as if the day for Christ returning would actually take place on Easter Day 1898.

“The Doomsday prophecies seem, unfortunately, to have won a larger following in the countryside that one would like to call upon. There is a lot of preaching about the end of the world here and there. As a proof of where this kind of propaganda might lead, Oskarsh. T. testifies that several workers at the quarry in Vånevik in Småland have left their tools and stopped working while waiting for the end of the world this Easter. And if more believers will congregate on a mountain on Easter morning at 5 am, when the wonder is to take place where they shall go to heaven.” (The daily newspaper Uppsala Nya Tidning, 16th of April, 1898.) “The fear of doomsday here and around the Småland countryside has created a lot of anger and has even caused a lot of sad aftermath. It is said that in Södra Hestra two women, both married, have lost their mind because of the fear of judgement day. (The daily newspaper Smålandsposten, 20th of April 1898.)

What later happened to the little group at Videmossen remains unsolved and their fate unknown. Perhaps family and friends showed them compassion and nurtured them back to a functioning everyday life ? Most likely their waiting by the stone became a stigma, something rather not spoken about. The history about the white clothed group and the cancelled trip to heaven can nevertheless be said to be trustworthy, as so many similar accounts are described in the newspapers.

“The fatal incident that doomsday did not take place last Easter Day has had its impact. Adventists of different sects have gotten proper chocks.” If Franson – “Himlaurets” big guy – comes here now he will be given words, not spiritual songs. A cooling water on hot brains ! If they at all are to be found ?” (The newspaper Gotlands Allehanda, 18th of April, 1898.)

More than a hundred years have passed since all of this tool place and many are those that since have tried to pin down the moment for the apocalypse. The material for thought is still around in small but extreme groups. The apocalypse is a recurring theme in contemporary culture but is also a very real shadow on current political conversation and debates around the climate. Ideas of the end of the world lives on in our secular time.