The Black Rock is Hard to Find Solo

The exhibition consisted of two single-channel video projections, multiple rock-shaped objects, two-dimensional works, poetic wall texts, sounds, and a series of performances. The artist explored how the traditions weave into different forms of modern Korean life. What I made me particularly interested in this show was how Oh took the exhibition as an artistic medium and presented interesting exhibition strategies. In other words, Oh is no longer an artist, but an exhibition-maker. Traditionally-speaking, curators select the works and organize exhibitions, while artists produce artworks. However, on the poster of the exhibition, the artist presented himself as a curator or organizer of the exhibition. This is not because Oh served a typical curator of an institution, but there were several processes involved in what we call “the curatorial” in the exhibition-making process. Curating has dramatically changed over the last decade, becoming more and more creative, imaginative, and even artistic. It has evolved beyond the selection and the placement of artifacts in a space ; it has become about sculpting the experience of the audience, collaboration, communication, and innovation. 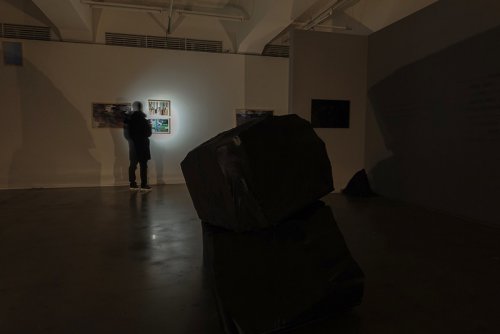 The exhibition text says, “it is the process of finding traces of unfamiliar sensations that are left in traditional culture.” When I walked into the entrance of a very dark gallery space, I encountered a wall with a sentence saying, “Please use your cellphone flash function to explore the exhibition.” The space was very dark, like a cave. I needed a source of light to see and move forward. When I turned on the flashlight on my cellphone, I saw a very large black rock-like object. I felt like I started hiking with a flashlight in the mountain at night. From that point, everything became unexpected. I moved very carefully to find the hidden objects because I did not want to destroy any artworks. At the same time, the nervousness gave me a sense of excitement to discover new things. As I moved around my flashlight, I found wall texts, pictures, and other rocks, hidden in the dark gallery space. My journey in darkness began.    As I passed the first large rock, I encountered poetic wall texts that sounded very old. By “old” I mean, the sentences seemed to be from the Joseon dynasty, which was a Korean kingdom that lasted for approximately five centuries, speaking about the culture of ordinary people around rocks. There were various names of rocks on the wall. The texts seemed to present how people from the Joseon dynasty put special meanings onto rocks. The names and meanings were forgotten as time passed by while rocks remained nearly intact. This was the introductory part of the exhibition that uncovered the hidden traditions of Korea. 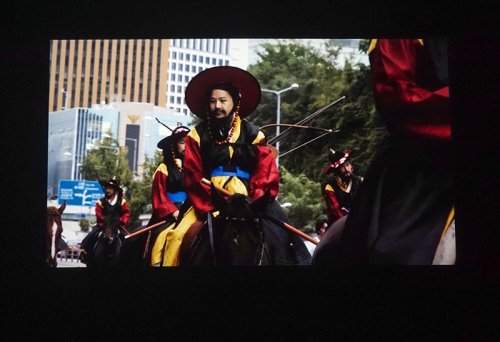 As I moved forward, there was a documentary video. In the video, the camera captured people who wear traditional costumes and conduct traditional ceremonies in modern Korean life. Korea experienced a sharp swift during the Japanese colonialism(1910–1945) and the Korean war(1950–1953). After these two tragic events, Korea has had an extremely fast Western modernization. Almost everything was rapidly changed, ranging from buildings to other forms of life. The video tried to show the remained traditions in today’s Westernized Korean society. Our traditions have been revived as the forms of tourism, consumerism, and capitalism. It was a great irony.    After reading other wall texts about rocks and looking at other rocks and semi-abstract pictures that seemed to be related to the topic presented in the exhibition, there was another video projection in the last part of the exhibition. The video presented a series of rocks with the traditional Korean melodies and lyrics, telling stories about the rocks. The exhibition text explained that the traditional song tells the stories about more than 80 rocks on its journey from Seoul to Pyongyang. The artist tried to trace the rocks described in the song without not-so-specific GPS information. For Oh, it was a journey and discoveries of the unknown in darkness. The artist wanted the audience to have a similar experience in the exhibition. The artist staged a dreamy space with the whole experience for the audience, who were not passive onlookers but active explorers. The audience moved around, looked at, listened to, read, felt, and found the hidden Korean traditions as if they hiked in darkness. 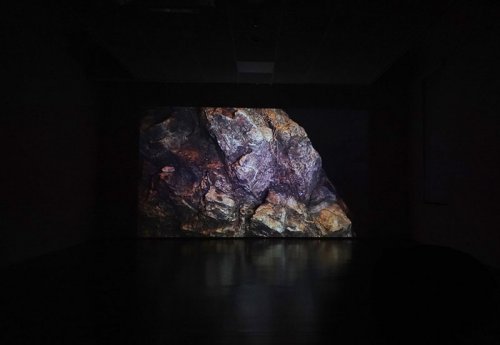 Finally, during the exhibition period, there were three live performances by professional performers who practice traditional Korean music and art. The artist has known them for years and collaborated with them on various occasions. Oh explained that their collaborative experience had influenced his artistic concerns for many years. This might be one of the main reasons why Oh called himself a curator in the exhibition. The exhibition was the result of years of collaboration, communication, and innovation with people and ideas. Oh brought them together as a whole.