Asia Contemporary Art Platform NON Berlin and Meinblau co-present station MOVES, a group exhibition curated by South Korean curator Yongdo Jeong. The project investigates critical and timely issues in contemporary art and the role of media in the reality of political and economic division. This show brings together diverse viewpoints of constantly changing strata of time and space from contemporary artists from Germany and South Korea. The artists deny the concept of a station as a self-enclosed, fixed, and bounded whole. A station becomes a boundless, fluid, and ever-changing entity. The role of the artists is to push each station toward openness to one another, creating nodes as various fields of knowledge reform and cross among themselves. 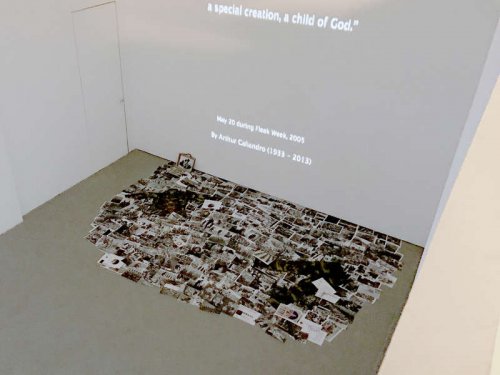 Sook Jin Jo, I Have A Dream, video, copies of photos, military uniform, 2016

The socio-political condition between South Korea and North Korea is one of the main conceptual departures in the exhibition. The artists revisit the post-Cold War era and uncover the political landscape concerning people’s emotions, memories, and desires. The artists investigate how the hegemonic historical narrative has affected them both physically and psychologically. For instance, Sook Jin Jo placed a pile of photographs taken during the Korean War with a single-channel video in the background. The audience encounters the bloody images of atrocities during the Korean War such as a refugee with a baby strapped to her back, a crying child on the street, soldiers, dead people, etc. The video shows the parts of a speech given by American pastor Arthur Caliandro at the gathering of the US Navy servicemen during the Fleet Week in 2015. 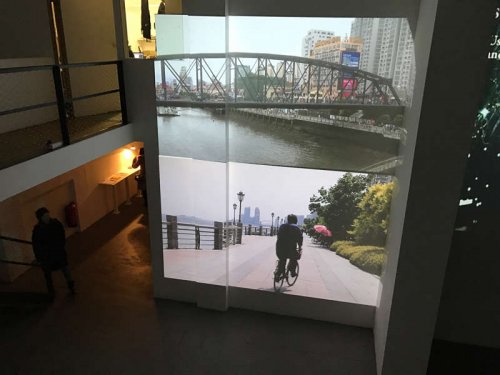 Noa Im presents unheard stories around the Yalu River, a natural border between North Korea and China. The border is forbidden for South Koreans to cross, but other foreigners are allowed to enter as a popular tourist attraction. The Yalu river was a natural border between China and Korea for centuries. Korean people were able to cross freely in the past before the Korean War. In the video, Im weaves video footages taken in both the North Korean side and the Chinese side around the river, interviews with local people, and a performative action together into a story around the place. 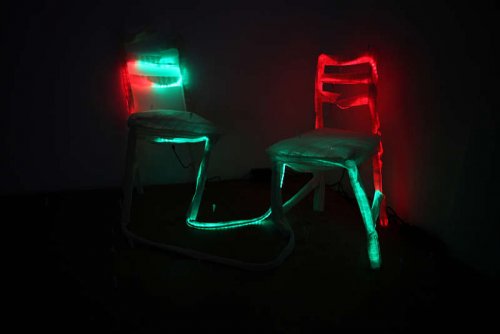 Eunok Hwang placed two damaged and fragile chairs side by side. Hwang connected the two chairs with a string of moving LED lights. Her installation directly designates the current situation between North Korea and South Korea, as the two countries have been ripped apart and wounded while yearning for healing and a peaceful reunification. According to Hwang, she tries to create the disconcerting feeling of two bodies whose blood circulation slows down, pauses, and then crashes. 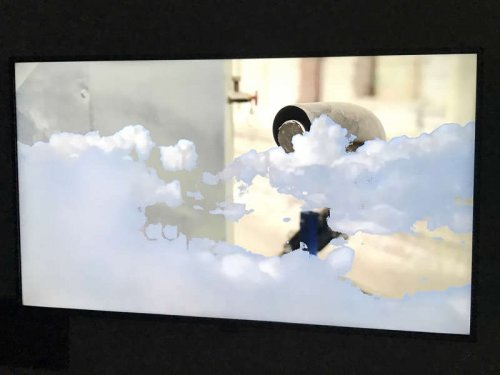 Some of the artists in the show are interested in networking of digital “stations” by allowing various data to collide, morph, evolve, and integrate into one another. Data enter into confederate bodies, grouping together in order to enhance their network power. What makes an assemblage possible is the temporal networking of a set of elements from different paths. In an assemblage, members move in and out of phase over time. For example, Fabian Bechtle presents a single-channel video with a series of small photographs that focuses on the copyright of the transformation of data. Bechtle collected footages from Reisswolf, one of the leading European companies for data and document destruction. In the video, images of different sources blend into each other, creating an assemblage as a whole. In his book, Postproduction, Nicolas Bourriaud talks about the task of a DJ who selects cultural objects and inserts them into new contexts. A DJ re-activates the history of music by mixing and re-arranging pre-existing songs in order to create his or her own DJing style. Like a DJ, Bechtle also actively reuses pre-existing cultural and social forms and places them into new contextual meaning as he destructs and re-combines visual data to manifest how contemporary consumptions of data rupture and morph into each other. 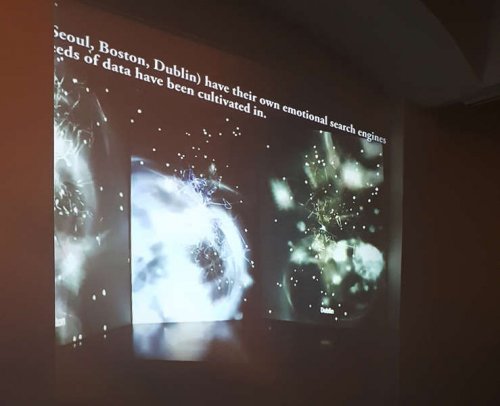 Joeng Han Kim presents a visual epic of his journey in qualia landscapes. By qualia landscapes, Kim means primitive feelings prior to our conscious cognition. Kim has been inspired by Leonardo da Vinci’s City of Water, Design of City as an organism. Kim sees a city is an evolving being with a complex system comprised of men and systems alike. Kim looks at the contemporary city as a data-flow inside and outside our body like an interconnected organism. If the city is viewed as a human body, the neural transmissions can be seen as a data flow of our time. What is at work here is what Deleuze and Guattari call an assemblage. An assemblage is a sphere of multiplicity, of heterogeneous elements of all sorts. Its parts are co-functioning, symbiotic, and sympathetic, mixing together like an alloy. An assemblage is a living confederation in which various things continuously cross paths without any central control : things move in multiple directions at different speeds and intensities, interacting all the while. 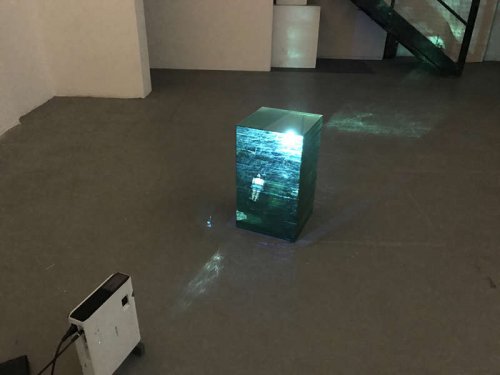 Nature as a state of flux also gives inspiration to the artists in this show. Nature itself is a station on the move. Konrad Mühe placed a stack of glass plates on which a projector projects a moving image of himself drifting in the ocean in a constant state of flux. The cube of stacked glass sheets captivates the artist’s body inside the cube while it disperses the rest of light into the gallery space. The artist’s body keeps his arms and legs stiffly straight while the artist let himself flow along the water. The artist resists and submits his body to nature both at the same time. Like a series of physical tests, the viewer observes a body under the influence of exterior conditions. 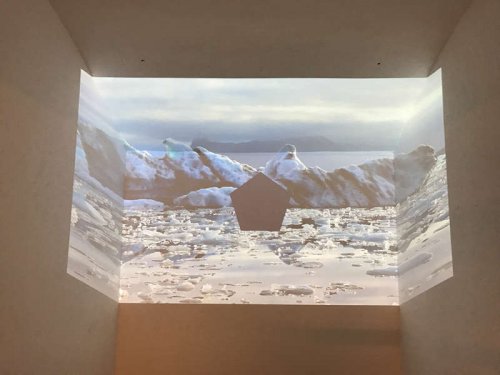 Jaewook Lee sees the Earth as a living organism that is constantly mutating and changing. The title of the video borrows from the 3rd chapter of A Thousand Plateaus by Deleuze and Guattari. The video presents nature before the imprinting of human marks and construction of language and after. In the video, a computer-generated voice reads an excerpt from the 3rd chapter over the video footages of ices in both macroscopic and microscopic levels with a series of changing geometric shapes.