In the corridors of the cosmic womb

“No Storiing” is a video reinterpretation Hervé Bernard of the Malin Bülow’s performance during biennale de Lyon 2019, herself rewied by Jean-Louis Poitevin.

From the sky they came. From the sky they fell. It is a wan and cold light that carried them here even though it is bright a bit higher. Orifices are sheathed openings. It is easy to identify them. They are the corridors of the cosmic womb. Nothing less. Nothing more. They are passages used by the infinite grey which wraps us up in its venomous attention to send messages. The crack suddenly materialises between the coming and going of the stars. And the news is potentially good. Earthworms without earth sway in the inner wind that gives them life as far as to endeavour to unveil the secret of their nonverval origin. Our fretful subcutaneous motions turn the clotted filaments into an umbilical cord. Sin seems capable of disowning its fault. 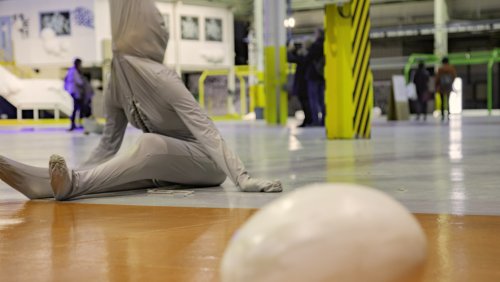 When the whole of it is reaching the retina of those aspiring to good, memories have been untied. What is left is only a handful of grey sand binding the hand to knowledge.

And then appears the thing which is only believable for those who are watching it despite not actually seeing it : the rules of time being turned upside down as the worm which wriggles endlessly out of control, hardly covered by its borrowed skin, is replaced by an egg, as a structural magic trick of bloodless manipulation. And there is no one there to tell who delivered this egg or even help to choose between the two most likely options. There is no one else either to take bets and choose between Icarus and the Devil.

Artistic performance made with the support of : The Royal Norwegian Embassy, the Office for Contemporary Art Norway (OCA) with the kind cooperation of the Conservatoire national supérieur musique et danse of Lyon.