What does it mean to revisit and reinvent history in the present tense ? How do history and its cultural representations relate to each other to address various issues in contemporary society ? Challenging the linear concept of temporality in chronicling the past, the present, and the future, this panel demonstrates how contemporary Korean culture appropriates history as usable ingredients to visualize not-yet-realized aspirations, exemplifying contemporary visual culture. Oscillating between the past and the present, memory and history, private and public, fact and fiction, contemporary visual culture reinvents the past to envision the future.

At the College Art Association 107th Annual Conference, Boyoung Chang, Gyung Eun Oh, Saena Ryu Dozier, and Jaewook Lee presented History of the Future : Curious Cases of Reconstructing History in Contemporary Korean Visual Culture. This panel presents various methods of representation from the vastly public medium of popular film to fine arts media of photography, video, installation, and performance, and attempts at unconventional formats with an on-site performance project. While the cases revisit historical moments from an extensive time frame of Korean history, from ancient Korea, to the 18th century Chŏson Dynasty and up to modern Korea of the 1950s and 1980s to reincarnate them in the late 20th and 21st centuries, they intersect with global cultures of Germany and the US, eliciting international appeal. Such ostensible contradictions between the subject matter of the past and technologically advanced mediums of the present, and coupled with national history and global topics, perfectly epitomize Korean society and the drastic transition to democracy, capitalism and globalization which it has undergone, placing the Korea’s culture in ongoing conversations with global cultures.    Our panel comprises of four panelists from various fields : an art historian, a photo-historian, a film scholar and a visual artist. We hope this diversity will lead to an interesting discussion of strategic use of historical construction and its pertinent issues in contemporary Korean art.

1. What’s Tangun Got to Do with Alexander the Great ? : Nam June Paik’s Erroneous View of History by Gyungeun Angela Oh

For the German Pavilion of Venice Biennale in 1993, Nam June Paik, a Korean-born artist materialized the journey of Marco Polo, a Venetian who went to the Far East and transmitted its commodities and culture back to the West, echoing Paik’s own contribution to Western art. This paper betrays the exhibition’s layered meanings by analyzing the installation structure : two wings each housing a series of video sculptures representing historical figures and a multi-channel video installation titled Electronic Superhighway. I propose a new way of reading this exhibition as a feedback mechanism of polar opposites serving for the cultural revolutions : the Asian culture stimulating the Western civilization, the ancient history calling for the wildest scientific imaginations and the extreme nationalist thinking leading to the most global phenomenon. At the heart of this mechanism lies Paik’s arbitrary construction of historical narrative that challenges orthodox history, such as placing Alexander the Great next to Tangun, the first king of Korea, who are factually unrelated both chronologically and geographically. The paper uncovers a publication fabricating the ancient Korea’s extension to Eurasia that Paik utilized to subvert the jingoist view into a fascinating history of cultural hybridity and globalization. This pattern beautifully justifies Paik being the German representative as the regional theme of divided Germany turned into that of global cultural exchanges. Electronic Superhighway, in which Paik had previously proposed the broadband information highway, adds to the interpretation as a metaphor for the importance of cultural exchanges for the invention of scientific breakthroughs as history tells.

Sagŭk is a South Korean historical film genre set in the premodern past. From the 1970s until the 1990s, sagŭk was considered box office poison, shunned by filmmakers, critics and audiences with very few exceptions. Post-2000 sagŭk actively adopts blockbuster aesthetics, reviving the outdated and supposedly dead genre. How do we understand the large scale special effects used to represent history ? This paper interrogates the role of the unsettling effects and affects of the sophisticated computer-generated imagery created to portray premodern history.

This paper argues that when visual assaults are too overwhelming spectators find themselves detached from the narrative but forced to stare at the images. Although this kind of experience is extremely brief and quickly passes, the visual shock “erases” the narrative’s “before” or the anticipation of “after” by isolating and privileging the very moment of a spectacle. In this way, this paper proposes that blockbuster aesthetic used in the rendition of the premodern past provides an alternative way to look at history. The alternative way is to understand history not as a continuous narrative or as organized knowledge of a connected process but as an accumulation of isolated moments, like the individual raindrops in a downpour. As spectators are deeply immersed in the images, they are fully aware of the act of looking and are not confined to the illusional world created by a narrative ; significant parts of personal and historical events are remembered—not in sequence but as bursts of isolated events.

This paper also suggests that entrancing displays of imagery brought to life by digital processes are not unique characteristics applicable to the specific genre of Korean sagŭk but are shared widely across contemporary global epic cinema. Dazzling spectacles are what Koichi Iwabuchi calls “culturally odorless” images, easily decipherable and consumable by the global market. These images translate more easily than culturally saturated national images. Governed by the global capitalism of mass culture, visuality has already been globalized as evidenced by the ubiquity and homogeneity of digital technology. As a result, digital visual effects have become in fact the “real historical effects” of the contemporary. 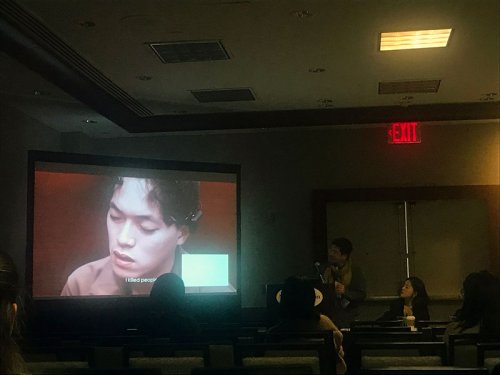 Like a mirror, our brain intuitively reflects others’ feelings and intentions. In other words, an observer has the capability to feel what other people feel. The discovery of these neurons has given scientific weight to the concept of human intuition and shows that the human brain is fundamentally geared towards social interaction. Two or more brains can become a single interconnected process. The mirror neurons that are responsible for our motor system are also tightly connected to language. This means one can feel empathy toward the other through reading, and that our physiological responses might also be triggered through linguistic modes of communication.

Recently, I’ve developed a video project called “Empathic Audition” (2017). The project revisits the historical letter written by Lee Woo Geun, a South Korean student soldier during the Korean War. The letter was written a day before he was killed by the North Korean troops. The letter, which was meant to be sent to his mother, was discovered on his corpse. I hired a couple of actors and asked them to read the letter as if they were the student soldier during the war. While the actors imagined the severe situation of the war, an Electroencephalograph or EEG machine scanned their brainwaves, revealing how empathy works when feeling the pain of the other. When the actors felt pain, their brainwaves were highly activated.

In the video, the actors read the letter, and each sentence is followed by a short sequence of pictures of the Korean War being projected on smoke. I used smoke due to their very nature of ephemerality in relation to the concept of memory. Memory is an event of the past, but the memory stays around one’s mind even though it is not out there anymore. Sometimes big social memories like wars stay in people’s minds from generation to another generation, and they affect human behaviors. For me, I was born in 1984 which was almost 30 years after the Korean War. Since two Koreas are still divided, the trauma of the war still exists.

The video allows the viewer to see how the actors feel the pain of the solider. And the viewer is also able to feel the pain through the actors’ faces and voices. Like our social memories flow from one generation to another generation, the feeling of the student soldier in the past is delivered to the present due to our capability of mirror neurons.

What does it mean to reenact a traumatic event after fifteen years ? How can art photography represent a deeply contested historical episdoe under an entirely different political context ? What if photographs decline to perform the expected role ? This paper discusses a photographic series, Gwangju Story (1995) by Korean photographer Oh Hein-kuhn, impassive images of which refuse to speak in layered structures. The series documents the filming of a movie recreating the Gwangju Uprising, a bloody democratic struggle that took place in Gwangju, Korea, in May 1980 against a martial law government led by Gen. Chun Doo-hwan and caused more than 600 deaths. The Uprising provides the narrative for both the film and the photographs, and also the physical location where they were shot. Additionally, about 3,000 Gwangju citizens—including those who directly experienced the Uprising—volunteered to join the reenactment to act the roles of both protesters and the soldiers who oppressed them, where about 100 professional actors worked for a realistic recreation. The political realities of 1995 are incorporated by the inclusion of civic groups demanding the truth about the Uprising to be told and by having real policemen oversee the filming.

Thus, the past intertwines with the present ; fact and fiction overlap ; and memories and personal experiences are incorporated into existing history. Contradicting this heightened complexity, Oh’s photographs are muted documentary images that disguise their constructedness by being full of uncertainty and lacking violence or drama that would evoke empathy. I argue that Gwangju Story reflects the unfixed status of the Uprising in history under the military government that repressed discussion of the event while also resisting impetuous historicization of its meaning at the rapid transition to democracy that needed to reinvent the past. In line with studies that question how to memorialize and incorporate trauma into history, this paper provides a non-conventional way to remember the past by avoiding mythicization.

Gyung Eun Oh is an assistant professor in Liberal Studies Department at Sangmyung University in Seoul, South Korea. She wrote her dissertation on the concept of temporality and musicality in the art of Nam June Paik. Her recent research interests include neo-Avant garde strategies of the artists in the 1960s and thereafter, technologies to visualize music, and the merge of science and artistic practices.

Saena Dozier is a PhD Candidate in Asian Literatures, Cultures, and Media at the University of Minnesota. Her research focuses on nostalgia in historical visual representations, its aesthetic effects and its relationship to realism, melodrama, and memory. She published “Coming Home : Finding Our Space of Innocence Through Sagŭk Films” (2017) in International Journal of Korean History and A Triangular Situation : Historiography of Yesterday, Cultural Nostalgia of Today in Korea (2010).

Jaewook Lee is an artist, writer, amateur scientist, semi-philosopher, and sometime curator. Lee is the recipient of awards such as the 4th SINAP (Sindoh Artist Support Program) and the SeMA Emerging Artists and Curators Supporting Program by Seoul Museum of Art. Lee has participated in exhibitions, talks, performances, and screenings at such venues as Hong-Gah Museum in Taiwan (2018), Art Sonje Center in Seoul (2017), the Guggenheim Museum in New York (2017), and the Asia Culture Center in Gwangju (2016), among others. Lee was a visiting lecturer at the University of Chicago. Lee currently teaches at the School of Visual Arts (SVA) and SUNY Old Westbury.

Boyoung Chang is a Ph.D. Candidate in Art History Department at Rutgers, The State University of New Jersey. She’s finishing her dissertation on contemporary Korea photography, focusing on how art photography intertwines with the transformation of the nation since the late 1980s in terms of social, political, cultural aspects. Her research interest also includes interactions between artistic and photographic practices among contemporary East Asian countries.