My niece is now a four-year-old. Her name is Jiyou. Between ages one and two, she mostly enjoyed touching things, especially glittering ones.

When Jiyou was three, she started to watch Disney animations, especially Frozen. As she began to speak, she tried to sing the songs and played with the dolls from Frozen. This year, her language skills have been steadily improving, and now she loves to speak. What she enjoys the most is switching words in a sentence. For example, she sang a Christmas carol, but she said “Mom” instead of “Santa” in the song, and then started to giggle. Jiyou understood how funny it was when she switched the two words. Mon had a white beard in her imagination ! She enjoys playing with language : she breaks the rules of language and finds the by-products from the broken parts funny. Perhaps, only humans can enjoy this kind of fun.

Games People Play is a group exhibition curated by Katia Krupennikova. The exhibition focuses on how language games reflect different aspects of human society. Underlying this theme is how humans play with signs in every aspect of our society. Imagine a dog. A dog also plays games, such as catching a ball. It is a purely physical joy. However, a dog never plays with signs. Unlike other animals, we humans do play with language. We, as a speaking species, find humor and pleasure in twisting the rules of language. The artists in this show focus on this form of play in complicated human activities. Language resides at the heart of their games. 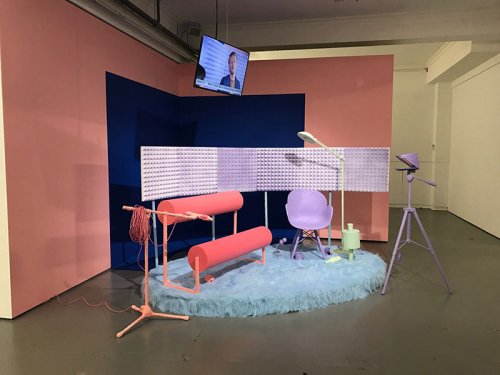 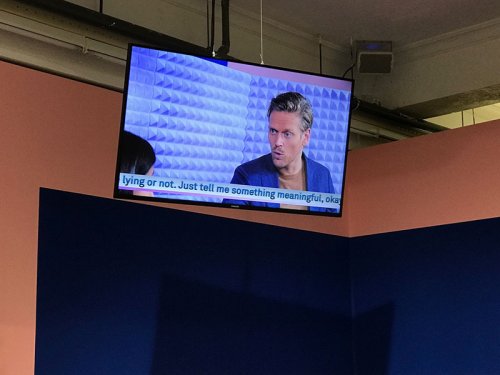 In Marijn Ottenhof’s installation with a single-channel video, two lovers are having a conversation. Their conversation sounds familiar because the artist borrowed conversations from the recent political debate between Hilary and Trump in the U.S. election, and from famous reality TV shows. The political debate has become a lovers’ quarrel in the video. The humor occurs immediately before we analyze the situation made by the artist, but this humor retroactively allows us to look at the real political event from a different angle. 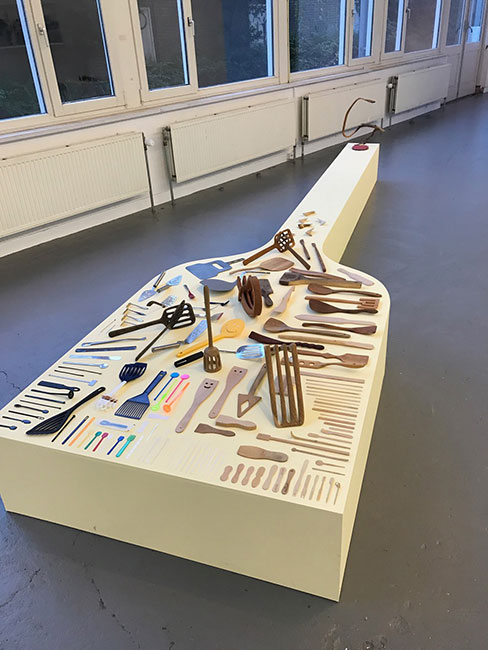 David Bernstein has collected a series of small and large kitchen scoops. Some of the kitchen scoops have smile faces carved by the artist. A couple of them are bent so that they are no longer functional objects for the kitchen. Since almost one hundred scoops are laid down side by side, they create a visual rhythm. They have toy-like qualities that excite us with a sense of playfulness. We observe how the word “scoop” has been detached from its origin and relocated within a playful situation. Bernstein relocates the coordinates of signs that are attached to a kitchen scoop and places them within the system of art. 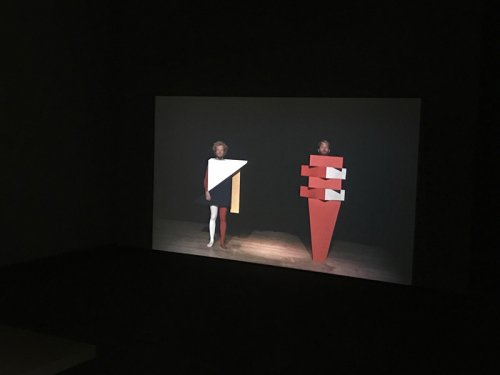 Feiko Beckers’ single-channel video shows two men wearing Bauhaus-like geometric costumes speaking to each other. They talk about mundane things in a conversation that is going nowhere. It circulates back and forth without any destination. The interlocutors are simply playing with language. The costumes they wear make their conversation even dumber. While the conversation may seem pointless, the video allows us to critically look back on everyday life to consider how pointless most of our daily conversations are. 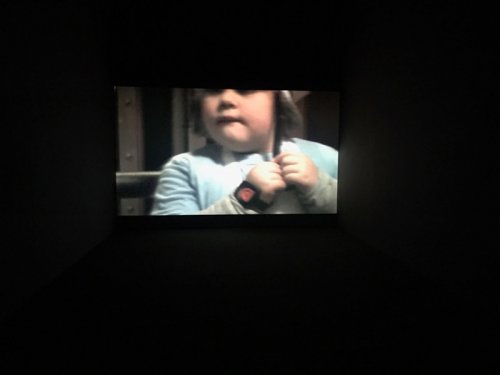 Priscila Fernandes shows a documentary film about a theme park where children engage in role-playing. For example, a child becomes a cook at Burger King and grills a roast beef. We believe fast foods should remain away from the sphere of education, but in reality, they are everywhere, threating the health of our children. The children in the theme park fantasize without any critical awareness that they are working in an adult world. They have no idea what it means to work in a fast food restaurant, but simply enjoy the role-playing. They are no longer “children” in this game, but their minds are not fully mature to understand the meaning of their act.

Humans are a species that uses language. Whether we aware of it or not, signs are deeply embedded in our daily life. Language is one of the main tools for humans to enjoy play. We know how to break the rules for the normative coordinates of signs and find joy doing it. Poetry often works best in this kind of game. In this sense, the exhibition Games People Play is playfully poetic.