Homelessness is a worldwide problem. Living in downtown Chicago, I am confronted with it every day as I go about my daily life. I see so many different faces, each with a unique and compelling story about how they wound up on the streets requesting money from strangers. Our society is moving in the direction of shredding the social safety net, which will make the lives of our most vulnerable fellow-citizens that much harder. 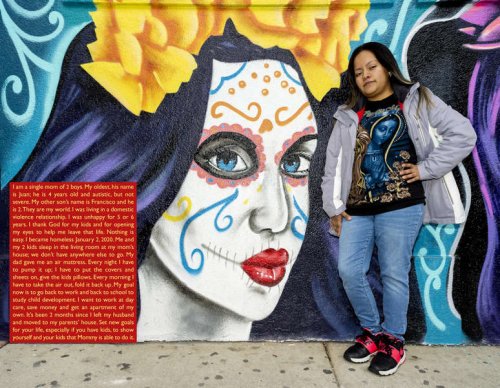 I am a single mom of 2 boys. My oldest, his name is Juan ; he is 4 years old and autistic, but not severe. My other son’s name is Francisco and he is 2. They are my world. I was living in a domestic violence relationship. I was unhappy for 5 or 6 years. I thank God for my kids and for opening my eyes to help me leave that life. Nothing is easy. I became homeless January 2, 2020. Me and my 2 kids sleep in the living room at my mom’s house ; we don’t have anywhere else to go. My dad gave me an air mattress. Every night I have to pump it up ; I have to put the covers and sheets on, give the kids pillows. Every morning I have to take the air out, fold it back up.My goal now is to go back to work and back to school to study child development. I want to work at day care, save money and get an apartment of my own. It’s been 2 months since I left my husband and moved to my parents’ house. Set new goals for your life, especially if you have kids, to show yourself and your kids that Mommy is able to do it. 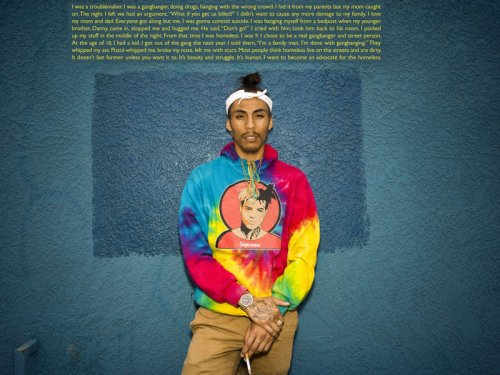 I was a troublemaker. I was a gangbanger, doing drugs, hanging with the wrong crowd. I hid it from my parents but my mom caught on. The night I left we had an argument. “What if you get us killed ?” I didn’t want to cause any more damage to my family. I love my mom and dad. Everyone got along but me. I was gonna commit suicide. I was hanging myself from a bedpost when my younger brother, Danny, came in, stopped me and hugged me. He said, “Don’t go !” I cried with him ; took him back to his room. I packed up my stuff in the middle of the night. From that time I was homeless. I was 9. I chose to be a real gangbanger and street person. At the age of 18, I had a kid. I got out of the gang the next year. I told them, “I’m a family man. I’m done with gangbanging.” They whipped my ass. Pistol whipped me, broke my nose, left me with scars. Most people think homeless live on the streets and are dirty. It doesn’t last forever unless you want it to. It’s beauty and struggle. It’s human. I want to become an advocate for the homeless. 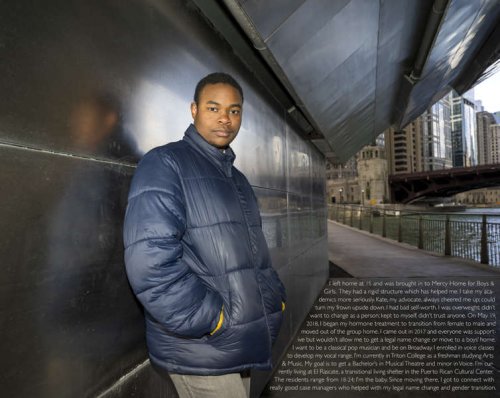 My brother, who is 2 years younger and I were adopted. My biological parents : my mother was a junkie and my dad was a Class X felon, in and out of prison. Someone called the police and when they came there was fecal matter everywhere. I was strapped down. We were taken to a hospital, then to our foster parents. I couldn’t walk or talk. We were supposed to stay 2 weeks, then 2 months, then 2 years. I was fully adopted at age 9. I was diagnosed as on the spectrum ; had to get a hearing aid.

Until the age of 14, everything was fun. Then my mom lost her job at IBM and was diagnosed with breast cancer. I went to a Catholic High School. I was closeted. I wanted to come out as trans but knew there were risks. There was a uniform code. I was bullied. I switched to a public high school. My senior year I enrolled at CPS Advanced Arts program in Music, Theatre and Dance. I had a wonderful music teacher.

I left home at 15 and was brought in to Mercy Home for Boys & Girls. They had a rigid structure which has helped me. I take my academics more seriously. Kate, my advocate, always cheered me up. Could turn my frown upside down. I had bad self-worth. I was overweight ; didn’t want to change as a person ; kept to myself ; didn’t trust anyone.

On May 19, 2018, I began my hormone treatment to transition from female to male and moved out of the group home. I came out in 2017 and everyone was supportive but wouldn’t allow me to get a legal name change or move to a boys’ home.

I want to be a classical pop musician and be on Broadway. I enrolled in voice classes to develop my vocal range. I’m currently in Triton College as a freshman studying Arts & Music. My goal is to get a Bachelor’s in Musical Theatre and minor in Voice.

I’m currently living at El Rascate, a transitional living shelter in the Puerto Rican Cultural Center. The residents range from 18-24 ; I’m the baby. Since moving there, I got to connect with really good case managers who helped with my legal name change and gender transition. 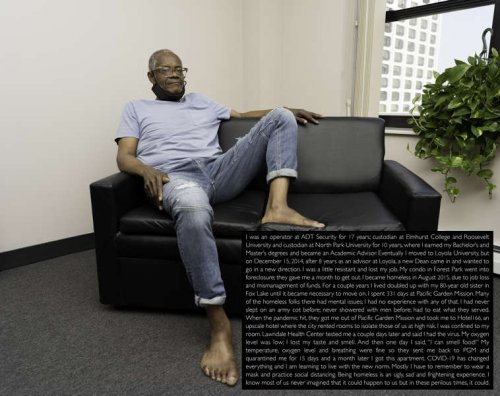 Ronald E Matthews, born 11/06/1954, South side Chicago I was an operator at ADT Security for 17 years ; custodian at Elmhurst College and Roosevelt University and custodian at North Park University for 10 years, where I earned my Bachelor’s and Master’s degrees and became an Academic Advisor. Eventually I moved to Loyola University, but on December 15, 2014, after 8 years as an advisor at Loyola, a new Dean came in and wanted to go in a new direction. I was a little resistant and lost my job. My condo in Forest Park went into foreclosure ; they gave me a month to get out. I became homeless in August 2015, due to job loss and mismanagement of funds. For a couple years I lived doubled up with my 80-year old sister in Fox Lake until it became necessary to move on. I spent 331 days at Pacific Garden Mission. Many of the homeless folks there had mental issues ; I had no experience with any of that. I had never slept on an army cot before ; never showered with men before ; had to eat what they served. When the pandemic hit, they got me out of Pacific Garden Mission and took me to Hotel166, an upscale hotel where the city rented rooms to isolate those of us at high risk. I was confined to my room. Lawndale Health Center tested me a couple days later and said I had the virus. My oxygen level was low ; I lost my taste and smell. And then one day I said, “I can smell food !” My temperature, oxygen level and breathing were fine so they sent me back to PGM and quarantined me for 15 days and a month later I got this apartment. COVID-19 has changed everything and I am learning to live with the new norm. Mostly I have to remember to wear a mask and practice social distancing. Being homeless is an ugly, sad and frightening experience. I know most of us never imagined that it could happen to us but in these perilous times, it could.

As a photographer, much of my work deals with individuals who have experienced trauma in their lives. I have engaged in long-term portrait series of Holocaust survivors (Written in Memory : Portraits of the Holocaust, Chronicle Books ) ; American and Vietnamese War Veterans (Inconvenient Stories, Umbrage Editions) ; and more recently, Pigeon Hill : Then & Now (Kehrer Verlag), which pairs portraits I made of people residing in Bloomington’s Section 8 housing projects between 1987-1991 with portraits of the same folks made between 2011-2016. In all three series I interview the individuals and include their own words with the portraits. This strategy allows audiences to directly connect faces with stories.

Homelessness is a worldwide problem. Living in downtown Chicago, I am confronted with it every day as I go about my daily life. I see so many different faces, each with a unique and compelling story about how they wound up on the streets requesting money from strangers. Our society is moving in the direction of shredding the social safety net, which will make the lives of our most vulnerable fellow-citizens that much harder.

I could just wander around the streets and photograph, but given the sensitive nature of this subject, I’ve decided to work with non-profit organizations that deal with homelessness every day. I partnered with the Chicago Coalition for the Homeless, which helped me identify individuals to photograph and interview. This helps with the issue of informed consent, which is an essential component in all my work. I strive to establish a relationship of trust with the people I photograph and to portray them with dignity. I’ve learned from CCH and other organizations that homelessness takes many more forms than just living on the streets and that myriad other factors besides mental illness and drug/alcohol addiction are causes for this problem.

In fact, most homeless are invisible. People live doubled up with friends or family (it is estimated that 18,000 kids in Chicago Public Schools are homeless) ; in short or long-term shelters ; in hospitals or SRO’s (Single Room Occupancy hotels). There are homeless veterans ; individuals and families who were evicted when their residences were foreclosed on ; people who had sudden and serious medical expenses that insurance didn’t cover, wiping out their life savings. Job loss, divorce, death of a parent or spouse, domestic violence, lack of affordable housing, coming out as LGBTQ, leaving the foster care system, all drive homelessness. There are working poor who live in tents or their vehicles because housing near their workplace is unaffordable. I’ve covered as wide a range of individuals as possible in order to tell an accurate story about this world-wide crisis.

I expanded my series to include homelessness in Los Angeles as representative of some of the unique issues facing the homeless on the west coast. I’ve been working with Safe Place for Youth and Venice Community Housing to help me identify individuals.

As I began to wind down my work, the COVID-19 pandemic hit. Needless to say, it had a particularly large negative impact on this rather vulnerable population. Accordingly, I added portraits and stories of several homeless individuals who came down with the virus and lived to tell the tale.

My hope is that my photo/text images can contribute to the public conversation about the causes and possible solutions to some of the difficult issues surrounding homelessness and to gain more understanding of this large but rather vulnerable community.