Growing up in Nonsan, South Korea, Kim Young-Hun spent a lot of time swimming in reveries inspired by comic books.

A highly imaginative child, at the age of ten he dreamed of becoming both a scientist and painter. Kim is now a painter, but he remains fascinated by science.

Kim describes the paintings he is currently producing “as lying in one of the cracks that are located in between the digital world and the analog world.” He creates in the viewer feelings of disorientation or mystery by employing a wondrously beautiful and elusive painterly language. Were you to take a monochromatic light source and shine a beam on a screen containing two narrow slits such that some of the light will cross the slits and reach a second screen, you would find on the latter a pattern of fringes caused by interference between the light waves passing from the slits. If you extended this experiment through variegated versions of it, you would enter more deeply into the realm of quantum mechanics---a scientific domain that is still riddled by enigma, yet is critical to our current understanding of the world and the key to most of our technological advances of recent decades. But we don’t need to go that far this time. Suffice it for us to note the patterns of fringes that emanate from light. It is these patterns reverberating through Kim’s imagination that help him to transform his perceptions of the world into his art. 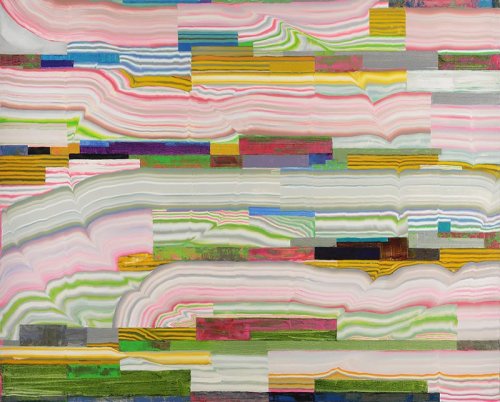 But not entirely, I suggest. A secondary influence surely lies in traditional Korean landscape painting, in which mountains are prominent. Observe the way Korean artists depicted most of these mountains. Mountainous terrain became real on painting scrolls via bands of tonalities, each bordered by subtle fringes that spoke of mystery and transcendence. You see vestigial remains of this great tradition in Kim’s twenty-first century paintings.

Before studying art in London, where he took an M.F.A. from University of Arts London, he was a Bachelor of Fine Arts student in Hongik University, Seoul. During his student days in Korea, he was a studio assistant to Yun Hyong-keun. Kim told me candidly, “My heart responded to this great artist’s work, but in my mind I thought I should look for something truly new.” Kim now agrees that Yun’s art remains a response to contemporary need.

Among Western countries, in the 1970s and 1980s, France took the lead in promoting Dansaekhwa—Korean monochrome painting that brought together a loose formation of artists who made abstract works in neutral colors. Since Yun Hyong-keun was a leading member of this constellation, it is fitting that Galerie Richard in Paris is having a show of Kim’s latest paintings from 16 November to 21 December 2019, as a follow-on to an earlier show in its New York space (12 March-13 April). 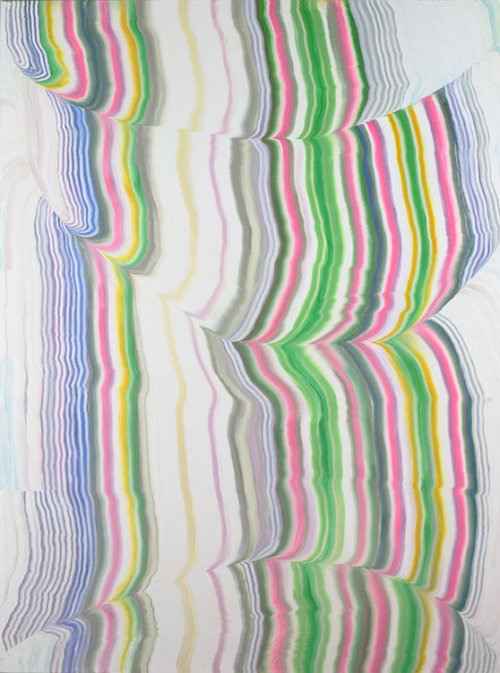 Also relevant : Paris was the city where a pre-Second World War art movement called Dimensionism was formed, bringing together the principal European artists of the 1930s, who were keen to reflect, and respond artistically to, the Age of Einstein—or rather to belong to it. For a variety of reasons, including the War and the subsequent Iron Curtain in Europe, the movement was aborted. But a manifesto inaugurating the group was not forgotten and its influence spread after the War. Among those who seem to have experienced this influence was Lucio Fontana, whose art Kim admires. The key point is this : Though not directly influenced by Dimensionism, there is a remarkable congruence between that movement’s aims and Kim’s science-inflected art.

Let’s look at four very recent paintings of Kim’s that are on display at the Galerie Richard exhibit—all created in 2019 and all belonging to his Electronic Nostalgia series : p1912, p1932, p1909, and p1904. Though not painted in the strong, bright pigments that characterized the work of the early twentieth century’s masters of color—the Expressionist painters—these works of Kim’s display a magical command of color even as they employ a more muted palette. Consider the subtleties of purple in p1912, which do not entirely dominate this painting but are key to its success. Ranging from dark purple to imperial purple to violet to magenta to pale purple as well as purple hues inflected by grays, these shades of the same color impart to the painting a sense of coherence that is at once lyrically expressive and subtly allusive. And now consider the artist’s great artistry when he intersperses this image’s rhythmic wave-like bands with rectilinear blocks of bold color, some of which are again permeated by various forms of subdued modification. Almost all of the painting’s imagery allude to landscape, inclusive of the natural world’s wave-like phenomena, whether at the grand, cosmic level or in the sub-atomic world. But the rectilinear blocks seem to have a special role. They seem to hold in them an idea of landscape—the soul of landscape, if you like. 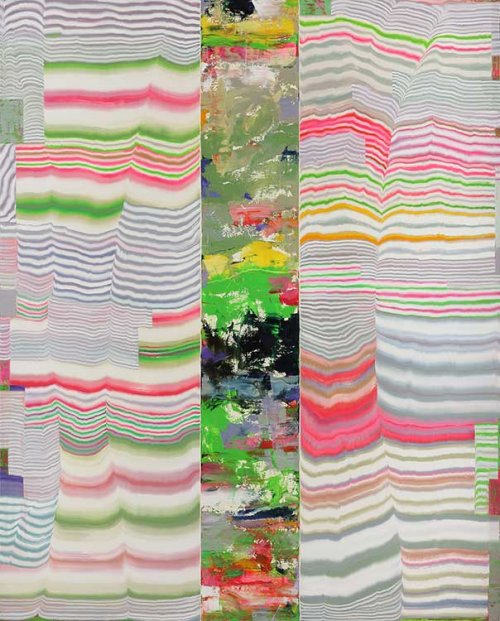 While p1909 and p1904 are broadly similar to p1912, p1932 departs from their basic geometry. Interesting, too, is the dominance in this painting of its blue rectilinear bands. One might even believe that this painting’s role relative to the three other paintings is similar to the function Kim assigns in general to rectilinear blocks. Also more evident in p1932 is the effect of Kim’s hand slightly trembling as he applies paint through repeated thin layers following the model of Hyukpil, the traditional Korean painting technique. In effect, we see the painter Kim confirming what Maurice Merleau-Ponty meant when he said, “The painter ‘takes his body with him’ says [Paul] Valery. Indeed we cannot imagine how a mind could paint.” Kim’s images are embodied things. Yet, through art’s magic, they transfigure the world, giving it a sense of order that is not independent of his art. Perhaps this is analogous to what happens in quantum theory, wherein the observer affects the observed reality through the very act of watching.

Given the previously-noted closeness between Dimensionism’s aims and Kim Young-Hun’s art, it may be interesting to recall Leonard Shlain saying in his fascinating book Art and Physics : Parallel Visions in Space, Time, and Light : “Art and physics, like wave and particle, are an integrated duality. They are simply two different but complementary facets of a single description of the world.” Let’s keep that thought in mind as we contemplate Kim’s beautiful paintings. 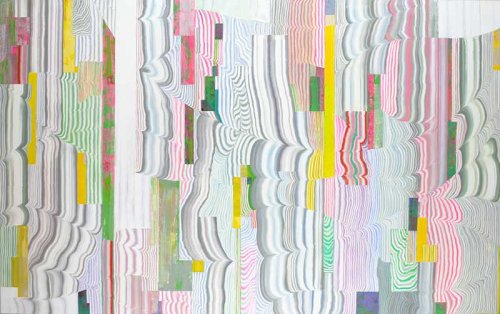