Efficiency of the Economical at the XII Baltic Triennial

The physiological structure of birds’ bodies displays many particular adaptations for flight. Birds have a light but durable skeleton : their bones are hollow with crisscrossing supports for structural stability. They also have light but powerful muscles to support the wings, skin, and legs in order to fly efficiently. Thanks to their respiratory system with the high metabolic rate, birds are able to meet the high oxygen demand for flight. In this sense, the trait of birds’ bodies is economical.

The adjective “economical” implies not only being frugal or thrifty, but also being cost-effective by using the minimum required in order to produce optimum results for the expenditure. The artistic adaptations with regards to the current economic weather give rise to cost-effectiveness at the innermost heart of the XII Baltic Triennial : the exhibition, curated by Virginija Januškevičiūtė, is light but strong in its material, meaning, and manner. The art objects, architecture, performances, and talks in the show possess airy properties in order to maximize their effects. 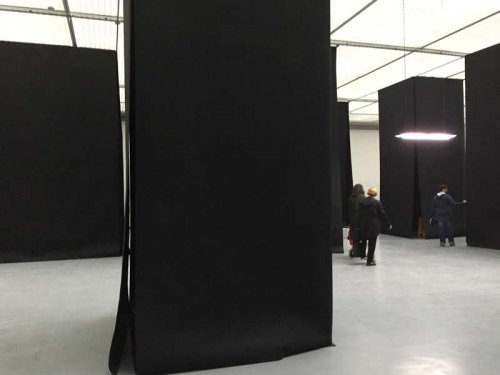 Architect Andreas Angelidakis built a series of black rectangular towers that occupy the main exhibition hall. They are actually cheap felted wools hung from the ceiling. This thin layer of the felted fabric separates inside from outside, inviting the audience into the dark to experience video works, a performance, a sound piece, etc. They look like neither a partitioning wall nor a black box for films, but these low-cost fabric structures effectively function both ways at the same time. 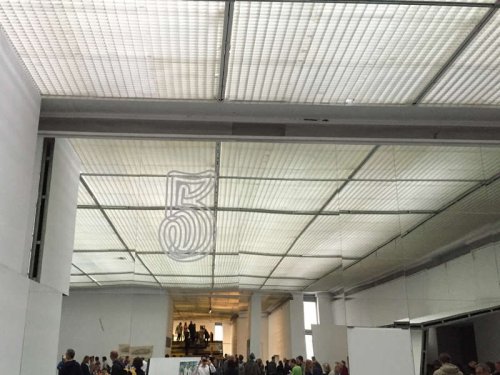 Artist Marcos Lutyens covered a large portion of the wall with plane mirror panels. A mirror is a peculiar object due to its double trait. The material presence of a flat mirror is mostly invisible as it conceals itself by reflecting the surrounding. Paradoxically, a mirror manifests its presence only through reflecting others. A mirror itself is flat, but its effect is spacious. It always remains interstitial. Lutyens’ interstitial intervention in space is minimal, but the outcome is grand. 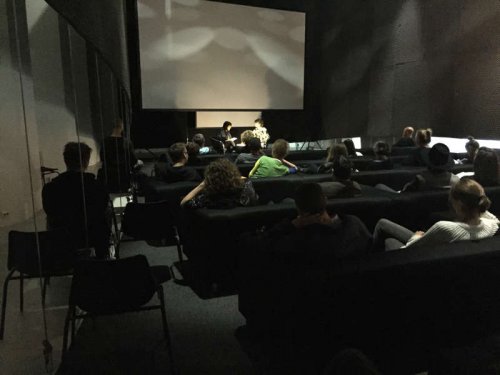 The World in Which We Occur (Margarida Mendes and Jennifer Teets), The Voice Archive, 2014

The World in Which We Occur, an event led by Margarida Mendes and Jennifer Teets, invited scholars from all around the world, discussing important issues through less-anthropocentric worldviews in the CAC’s cinema hall. Unlike other overwhelming conference atmospheres by the presence of the panels on stage, their ninety-minute lectures reached the audience rather friendly : the guest speakers remotely delivered their lectures simply through live phone calls, which is economical. 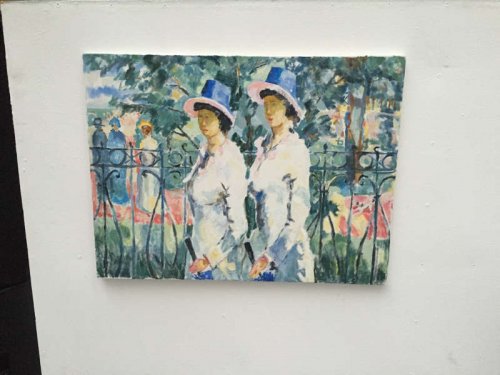 Kazimir Malevich, Sisters (re-painted by Rūtenė Merkliopaitė), used for Perrine Baillieux, Be As It May, 2014

Some of the works are economical, not because the artists chose practical methods, but because they chose issues that are marginalized or misunderstood by the hegemonic ideology. French artist and musician Perrine Bailleux conducted a series of “lecture concerts” called Be As It May. She reinterpreted Kazimir Malevich’s painting Sisters with music and slide shows on a screen. Art history floats on the rhythmical waves, and its extravagant meaning found relaxation. According to Bailleux, the two women on the painting are not sisters, but the same woman in two different moments in time. In Gerda Paliušytė’s film The Road Movie, two New York rappers wonder round Vilnius, and their encounter brings about accidental humors and the cultural unhomely. Artist Jay Tan presented connected speakers on which the viewers were allowed to spit. 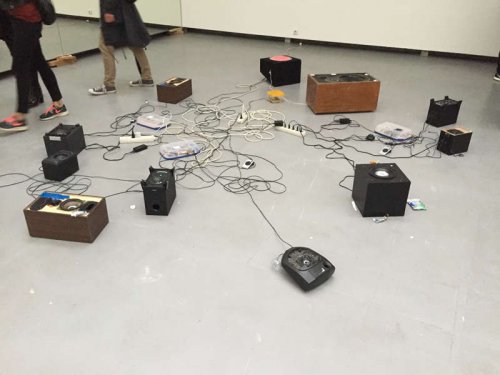 In this exhibition, things are economical in its material, meaning, and manner. They are light enough to floats around, establishing liaisons with other things in order to generate a collective efficiency. The result of this light assemblage is a co-functioning like an amalgam of contagions, epidemics, and the cloud. Their equivalence grants a chance of encounters of thoughts, imagination, and reflection to anyone and everyone. An interaction is always a local event, while the synergies on this light event are not local at all.