‘Demolition Site’ of Jihyun Jung shows us the artist’s traces left in a demolition site in redevelop area. We think we have been used to those sites but at the same time in some way we haven’t. People both desire and feel uncomfortable about newly built cities, which are built only for political and economic benefits trampling on their past.

The photographer, who has grown in this kind of city, has been seen the city taking the sites where people’s personal memories are stacked, only for its new functions. This experience leads him to be concerned about the process of creation and destruction which is omitted in the society where spaces are only classified as consumable object. He chose one of the buildings that were about to be demolished, painted its parts with red paint, and took pictures of it. Then after the building had been demolished, he went to the demolition site and looked for the traces of red paint and recorded them again. This record is not just a proof the terrible demolition site, but a record of figurative details of the building seen by an individual. The artist’s objective view toward those traces stresses the fact that he is paying attention to the distinct characteristic of a space as a medium of memory, rather than paying attention to emotional approach on losing it. 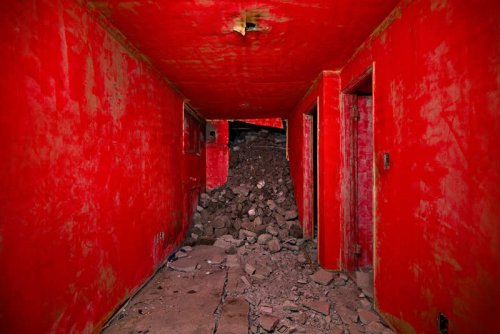 Demolition is one of the subjects which artists often choose as their subject matter. Imagine a demolishing construction where buildings are torn apart. It’s a great subject to arouse photographer’s interest. Screams of residents of demolished area and traces of violence of gangsters employed to throw those residents out are also great subjects. The problem is that there are too many artists who take pictures of demolition site. However it doesn’t mean that repetitive reproduction of the subject make demolition sites less meaningful. We can see messages with red letters refusing demolition on any demolition site’s walls. When you see them, you can feel desperate screams. Those screams exist because cities in Korea have grown with violence in guise of redevelopment. Every demolition has tragic aspect. Thus, the meaning of taking picture of demolition sites will never be meaningless. What’s important is the methodology in taking pictures. 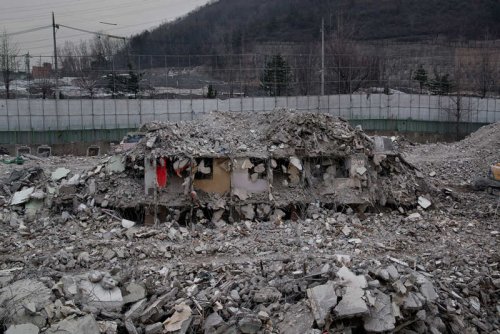 Jihyun Jung played his own performance through his art works to see demolition sites through his own point of view, not others. Painting a demolished building with red paint was the performance. The traces of his performance would fade away and never be retained in other people’s memory, because the buildings would disappear without leaving any traces. Those traces remain only in one person’s memory, the photographer’s. At this point, ‘demolition’ becomes free from its cosmic meaning as a social issue, and transfers to personal level, the artist’s exploration. This process surely can be told as ‘exploration’ since the site was dangerous because of remains of demolished buildings. Also, there were guards who are as scary as iron bars and mass of concrete in the site. The photographer left his traces despite those security risks. 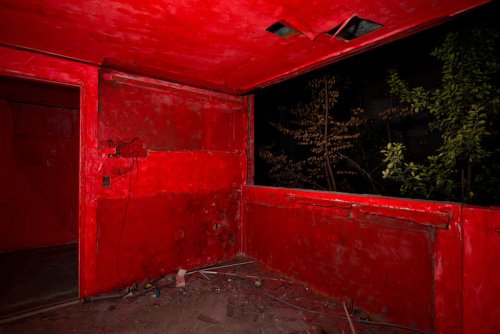 Photos acquired in this process are quite figurative rather than social. Those photos remind us of the artworks of a French photographer, Georges Rousse in some way. He painted uneven surface of buildings under demolition red, so that the surface can look like a circle or a square from a distance. Then he took a photo of it. In reality, the surface had irregular shape. However the photographer made it look like a geometrical figure. Though it looks like both of the artists’ works have resemblance, they are different from each other in that Rousse’s art works are playful while Jung’s are not. Rousse doesn’t pay attention to social tragedy caused by demolition. What he needed was only the irregular surface. However, Jihyun Jung’s photos are not playful at all. He deals with ‘demolition’ with seriousness. Photographers don’t see demolition as urban sociologists do. They have different point of view. Jihyun Jung needed to secure his own point of view toward demolition and his own sense of space. So he decided to paint buildings red. Through the traces of the paint which couldn’t last just for days, the demolition site was changed into photographer’s personal space. 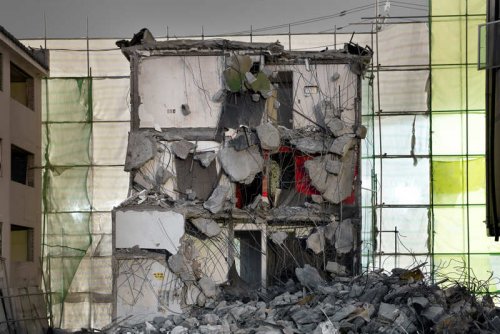 For him, recording something using photograph means active intervention. He sometimes transforms the subjects of his photos. However, this transformation helps the subjects to be remembered, not to be forgotten. His work makes the space remembered as a place which was painted with red paint once, even though the traces existed for few days. Painting is an active performance. But the place is helpless against violence of elimination that time has. As flowers which can maintain their lives only for few days are beautiful, Jihyun Jung’s red paint also looks beautiful. 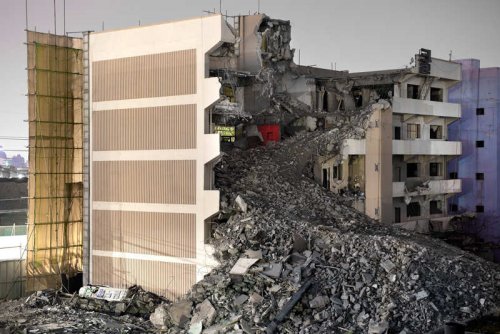