CHONG Jae-Kyoo’s great retrospective exhibition at the GANA gallery in Seoul. He explains his work and his approach.

A vidéo of HA Mikyoung, Alain Wagner and Martial Verdier

In Jae-Kyoo Chong’s works, the act of cutting up is an obsessive gesture. What is striking - and has been, since the artist became a “plastician photographer” - is the fact that each piece is made of thin strips. After the first moment of puzzlement in front of his works that at both visible and comprehensible, though they are blurred, it is easy to figure out that, at the beginning, there was an image, and that it was cut into strips, and that these strips were put together again and woven with other strips of brown paper. Obviously, our need for recognition is satisfied when we can recognize the figure that was there at the beginning : a portrait (the portrait of the newly- elected American president Obama), or a place (the Gyeongju temple, a highly symbolical place in Korea). But our vision is not less disturbed by this discrepancy, the intermingling of images with strips that contain no information and that are intertwined in the restructuring of the piece. 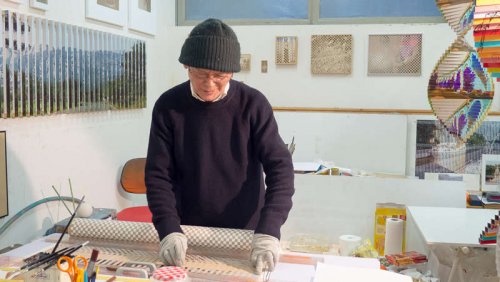 The gesture of cutting up and restructuring the image is Jae-Kyoo Chong’s statement that it is necessary to recover, in the act of seeing, this forgotten dimension - the dimension of hallucination - in vision.

A hallucination is not so much the clear and certain sight of something that is not present in reality, and is therefore not perceived by the gaze, as it is the sign of a vibration that signals the intrinsic instability of the visible. Through this gesture of cutting up, weaving and restructuring an original image, Jae-Kyoo Chong states that seeing is hallucinating, correcting, and re-establishing the image. Seeing is first and foremost feeling that what we see is not necessarily true and real, but is the product of a secret process. Seeing is not receiving information but perceiving something that has no definite form. Seeing is building up, from these unstable purely visual elements, something that speaks to the rational part of our mind. And that restructured thing becomes something that carries information. Jae-Kyoo Chong’s complex gesture acts as an active metaphor of the gesture of seeing. Or rather its transcription. What is disclosed to us is less an image than a process.

An heir of the early XXth century avant-gardes, and Russian formalists, particularly Mondrian, Jae-Kyoo Chong appropriates what such movements teach us, namely, the fact that what has long been termed as the motif only moves the viewer if it is involved in a mise en abyme of the very process of perception. Jae-Kyoo Chong’s aesthetic gesture of cutting up and weaving gives us a renewed sense of our potential for hallucinating, without which the real would not be invisible, but as cold as a corpse. 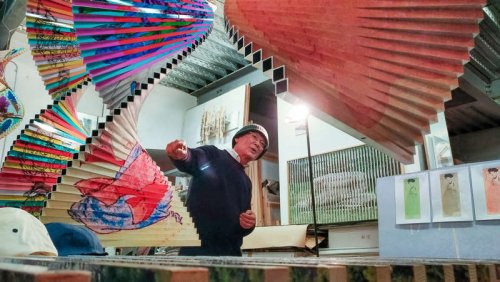